Below is a video showing a modified Maruti Brezza which gets an aftermarket CNG package. Read on to discover.

Being the Indian largest automaker, Maruti Suzuki is one of the first car companies in the country to offer factory-fitted CNG cars. The main reasons for this are the increasing pollution levels and rising fuel price. Numerous models in their portfolio which do not initially come with CNG kits have been installed with aftermarket units. The 2020 Maruti Brezza is one of the cars that do not come with a CNG kit. Below is a video which shows a modified 2020 Brezza with an aftermarket CNG package.

Uploaded by Takuli’s Talk on their Youtube channel, this video shows a 2020 Maruti Vitara Brezza which is currently offered with only a petrol motor. In the video, how the CNG kit has been installed in the car and how it performs after that are shown.

In the video, all the components which are utilized in the Brezza to help it run on CNG are shown. Under the hood, the subcompact SUV comes with an ECU, injectors, filler nozzle, advancer and a reducer. The piping and wiring have also been elegantly done. The advancer is used to reduce the lag which is a common problem with CNG vehicles. A thick pipe extends from the front to the rear where the gas cylinder is equipped. Once all the elements have been installed, the car is taken to a local gas station to fill and check for leaks. When all the inspection has been finished, the car is taken for a drive. The overall cost of the installation is approximately INR 50,000. While aftermarket CNG kits can help you save plenty of fuel costs, bear in mind that one of their main disadvantages is the factory warranty getting void. 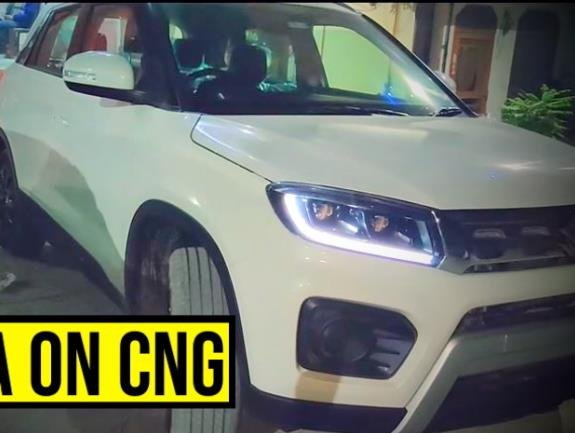 The Maruti Brezza is among the top-selling sub-4-metre compact SUV in India. The car competes against the Tata Nexon, Mahindra XUV300, Hyundai Venue and the recently-launched Kia Sonet. The updated Brezza was launched earlier this year with the major changes lying in the motor. The car now receives its power from a 1.5-litre NA gasoline burner which can generate 105 PS against 138 Nm and is mated to an MT/AT.