Still, it is a big surprise for us even though King Khan has been well-known for sending expensive cars and gifts to his co-actors and friends for quite some time.

Famous Bollywood veteran Salman Khan has been highly-admired for his super-cool expensive cars collection. Salman Khan’s cars garage comprises of high-end vehicles from BMW, Range Rover, Mercedes, Audi, etc. that cost normal people like us an arm and a leg to pay for. Besides, the Bollywood celebrity is also known for always surprising his family, friends and co-actors with ‘mind-blowing’ gifts and he just did something similar. The Bollywood star has just gifted his Dabangg 3 co-actor, Kiccha Sudeep a brand-new BMW M5 Competition on the account of the success of the film. For any true auto enthusiast, the BMW M5 barely needs an introduction. It is a performance-spec sporty sedan that looks much fancier and more aggressive than the regular 5-Series model.

The gifted car here is the BMW M5 Competition which was introduced to the Indian market in October 2019 at an introductory price of around Rs 1.55 crore (ex-showroom). Do note that it is the only variant of the BMW M5 in the Indian space to date and it was imported as a Completely Built Unit as per the market demand. 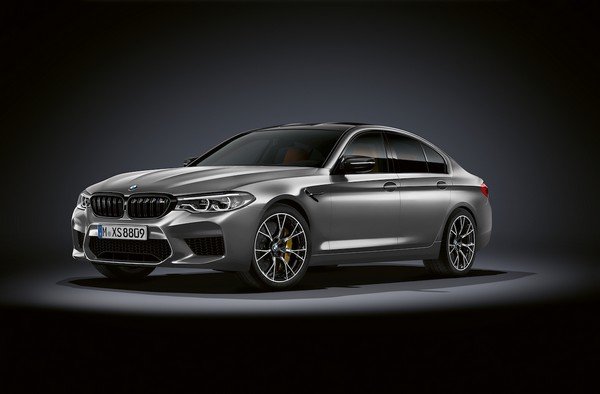 As for the visual package, the M5 Competiton features a host of changes on the outside and inside over the regular BMW 5-Series such as a redesigned front grille, ORVMs, a sporty rear spoiler and diffuser and side air vents, etc. The M-Series twin-exhaust system, high-strength CFRP (carbon fibre-reinforced plastic) roof, sporty side skirt, aggressive bumpers along with an M5 Competition badge are some major highlighting alterations of the model.

Powering the M5 car is a powerful V8 twin-turbo petrol engine that propels a massive power of 625 PS and a whopping 750 Nm of torque. An 8-speed automatic gearbox is adopted to take over the transmission duties. Thanks to the M xDrive drivetrain system including the 4WD, 4WD sport and RWD modes, the BMW M5 can rocket to 100 kmph from a standstill in only 3.3 seconds

Back to King Khan’s latest film, the Dabangg 3 was just released some weeks ago but manages to set the box office on fire with a business of more than Rs 137 crores. The feat was contributed by the presence of the popular actor Kiccha Sudeep who played the part of the villain in the new movie. Kiccha Sudeep has posted a thank-you note on Instagram recently that says that Salman Khan sir has surprisingly dropped at his place and gifted him the supercar. That sounds a bit familiar as Salman Khan did the same thing in the past when he gifted precious cars and things to his family and friends. For example, he gifted a Rs 55 Lakh worth house to Ranu Mondal, sent Katrina Kaif a Land Rover Range Rover Autobiography and a Rolls Royce Phantom worth Rs 3.5 crores to Arpita Khan and Ayush Sharma and even 5 BMW 7-Series cars to 5 people from Ra.One cast.