Taxi Driver Caught And Jailed After Challenging The Police [Video]

51 0
A taxi driver been put in prison after a video, in which he dares the traffic police to catch him, was released on the Internet.

The new challan rates in accordance with the amended Motor Vehicle Act have led to numerous incidents in which traffic violators are heavily fined. A few months back, a cab driver was sent to prison after a video in which he dares the traffic police to catch him was released on the Internet. The video shows the scenario before and after he was put in prison.

Within two days of this video being posted on the Internet, the man was arrested.

In the first part of the video, the man abuses and challenges the police to catch him. The reason behind this action was that he was furious with the traffic police for abusing and assaulting a van driver who is one of his acquaintances. The video was released on social media and quickly gained traction. The man is named Ravi and is a resident of Machubayanahalli village, Hunsur Taluk, Mysore. 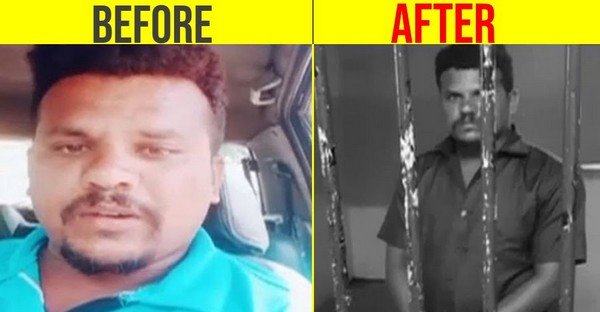 In the video, the man also adds that he is a taxi driver and has been driving his car in Bengaluru without any documents. He then continues to abuse and challenges the police to catch him if they have the ability to do so. Within two days of his video being posted on the Internet, the cops arrested him and put him in the prison for driving without documents. While the police might have been a little too harsh on his friend, abusing and challenging the police via a video on the Internet is never a wise thing to do.

Till now, people have raised plenty of protests have against the new challan rates (2019) under the amended Motor Vehicle Act. Some penalties under the new act have been increased by up to 20 times. Several other new rules and regulation have also been added to the act. Now, there are also provisions to fine traffic officers who violate the rules with double the amount in comparison to that for the civilians. Given the stringency of the new challan rates, several states have refused to implement the new penalties, while some other states have decreased the fines to a more acceptable amount.