From gold-crusting to jewel-encrusting to diamond-lacquering, there sure are quite a few things that the rich do to their cars that not many of us would understand.

Luxury cars are symbols of status that you “wear” out there for the public to see on a daily basis. While not everybody is aware of which car has the heftiest price tag, most people with common sense can point at an automobile and say with certainty whether it is a luxury car. Most of the time you can recognise a pricey car either by its emblem on the front or by the light reflection that the material gives. But with these crazy and super extravagant cars we are about to show you, you may not know jack about automobiles and you still can tell that these vehicles’ prices are higher than the sun, because they are decorated with gold and gemstones. These 5 cars will definitely take your definition of luxury cars to another level.

Just to give a head start, the ex-showroom starting price of a standard Mercedes G63 AMG 6x6 is 4,56,900 Euros (approximately Rs 3.7 crore). If you think that is very expensive, think again, because, in 2016, a fleet of bling-bling supercars owned by a wealthy Saudi Arabian tourist arrived at London, and one of which was a gold-plated Mercedes G63 AMG 6x6. This six-wheel off-roader draws power from a mammoth 5.5-litre twin-turbo V8 engine that generates 543bhp and 785Nm, and it has a 7G Tronic automatic gearbox. While it is unclear how much did it cost to cover the six-wheeled G-Wagen in gold, it is estimated that it took no less than Rs 4 lakhs.

Fun fact: Besides the gold-crusted Mercedes G63 AMG 6x6, the rich Saudi Arabian tourist brought to London a Bentley Flying Spur, a Lamborghini Aventador SV, a McLaren P1, a gold-plated Rolls-Royce Phantom Coupe, and a gold-plated Lamborghini Huracan. What a fleet of cars! 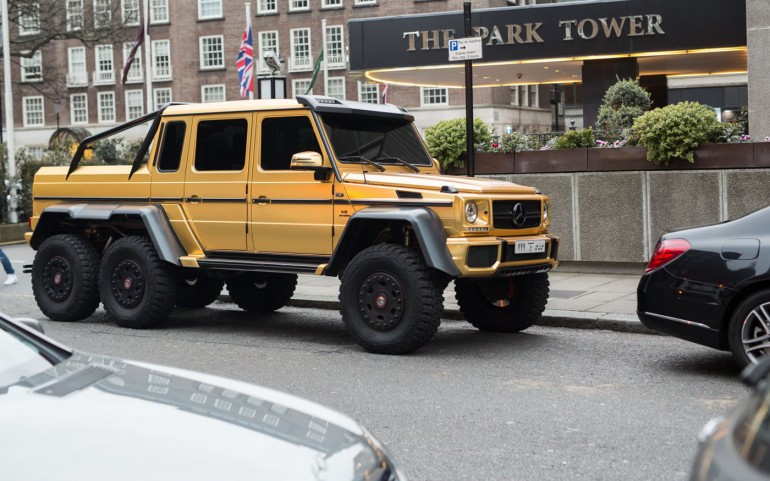 Different from the gold-plated Mercedes G63 AMG 6x6 above, this Maybach 62S Saloon was only partly covered in diamond. In 2011, at one of the most prestigious events at the Cannes Film Festival, de GRISOGONO Party, a diamond-studded Maybach 62S was revealed as the highlight. This special car was a collaboration between the Swiss jewellery manufacturer and watchmaker de GRISOGONO and German luxury car maker Maybach. They created and showed a limousine that not only had diamond studs on the rear armrest, but also the two luxury companies are open to other options of customising the interior with either diamonds or other gemstones. The diamond customisation alone was priced at USD 2,70,000 (approximately Rs 1.9 crores), and the Maybach 62S Saloon had the ex-showroom price tag of Rs 5.1 crores.

Later that year, the Maybach 62 Saloon was brought to the Dubai International Motor Show and it then had even more diamonds blessing the dashboard. 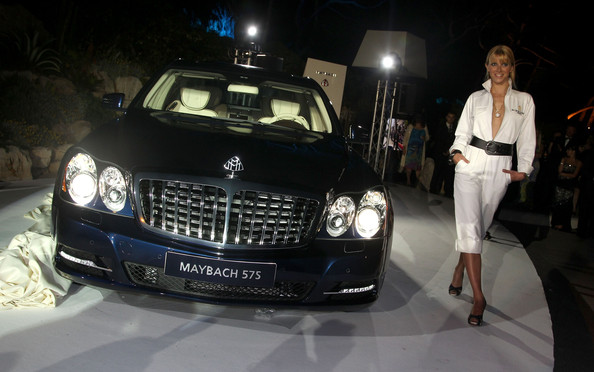 The diamond-studded Maybach 62S limousine made its debut at de GRISOGONO Party, a part of the 2011 Cannes Film Festival

When you think a 5.3-crore Rolls-Royce Ghost is lavish, think again, because Rolls-Royce unveiled a special Rolls-Royce Ghost that had diamond lacquer all other the body at the 2017 Geneva Motor Show. The car has its own name, “Elegance”, and it was painted with 1000 real diamonds. Elegance had a two-toned body with a darker top part, but the difference in colours was very subtle. Myriads of tiny specks of diamond all over body made the car sparkle in rainbow and opulence whenever the light hits.

Rolls-Royce said that this was the most intensive and expensive painting job they had ever done, as they had to spend 2 months figuring out a way to grind 1000 diamonds and incorporating the hard diamond “stardusts” into the grey paint in a way that still made the paint feel smooth. Even though they did say that the diamond paint was expensive, they did not elaborate on the exact pricing, because Elegance was the car that was commissioned for a private buyer. So, unless you are willing to pay for a Rolls-Royce Ghost that is the same as Elegance, you are not going to know how much it costs. 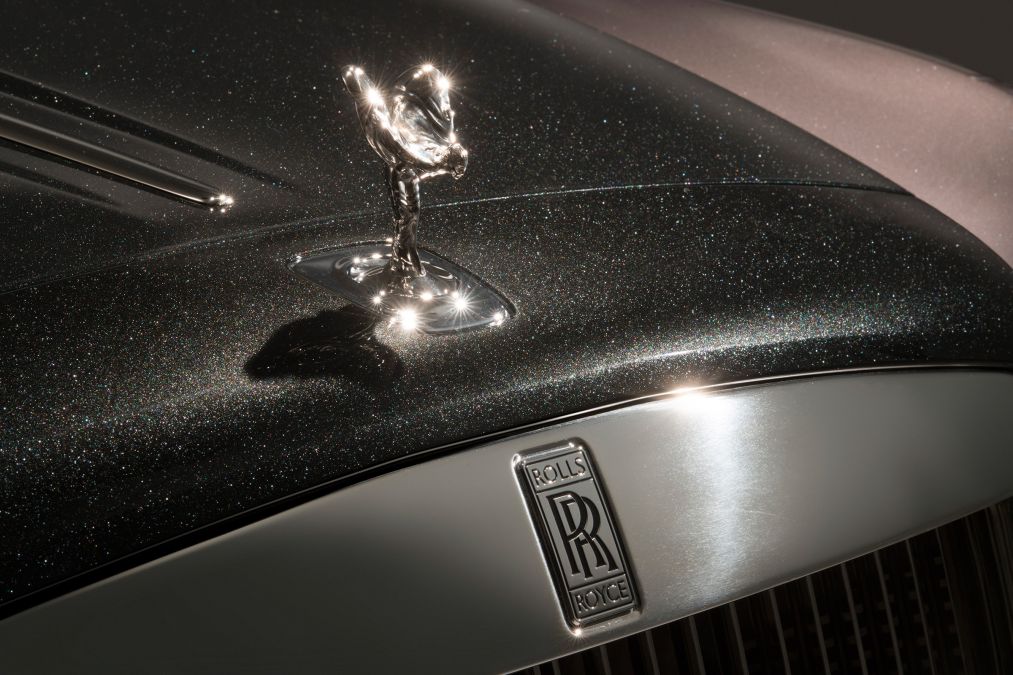 Elegance has the most expensive paint in all Rolls-Royce cars

A Swiss designer decided that jewels or gold alone would not make a luxury car, so they put both gold and gemstones in a Mercedes-Benz McLaren SLR 999. The car, which has a very befitting name of “Red Gold Dream”, was priced at a jaw-dropping and hard-to-believe rate of USD 11 million (approximately Rs 78 crores). The crazy price tag was justified by the exterior paint that had 11 lbs (5 kilograms) of gold and a jewel-and-gold-covered interior. The cabin was covered in gold leather and hundreds of real rubies studded it. The LED front indicators were also plated with 24-carat gold.

And no, no, that amount of gold and rubies was not opulent enough. So, the designer decided to put rubies in the illuminated front badge and the wheel bolts. To prevent the gold-and-rubies-studded Red Gold Dream from being stolen, the car was installed a GPS tracking device. But oh well, with 25 coats of gold paint on the body, the thief does not need to steal the whole car to make some good money. 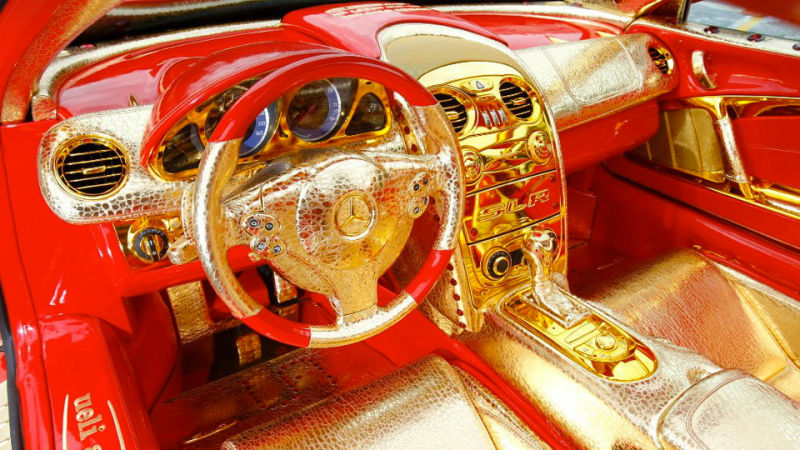 The most expensive car modification that has ever existed in the history was done on a Maybach 62S Saloon (Yes, another Maybach on this list) and the modification alone cost around USD 57 million (approximately Rs 4 billion).

Before getting on with how a flipping car modification can cost that much, let’s take a deep breath to calm yourself down first.

Basically speaking, this Maybach is covered in gold inside out, and to say that the car is dripping in gold would be a major understatement. It is said that, apart from the blingy gold exterior, the roof, steering wheel, air-con vents, seats, floor, turn indicator stalks, and satellite navigation screen are all gold.

This mobile gold bar is owned by Theo Paphitis, English-Cypriot retail magnate and entrepreneur, and the licence plate of this gold car is RYM4N, which is indicative of Ryman, Theo’s stationery retail company. 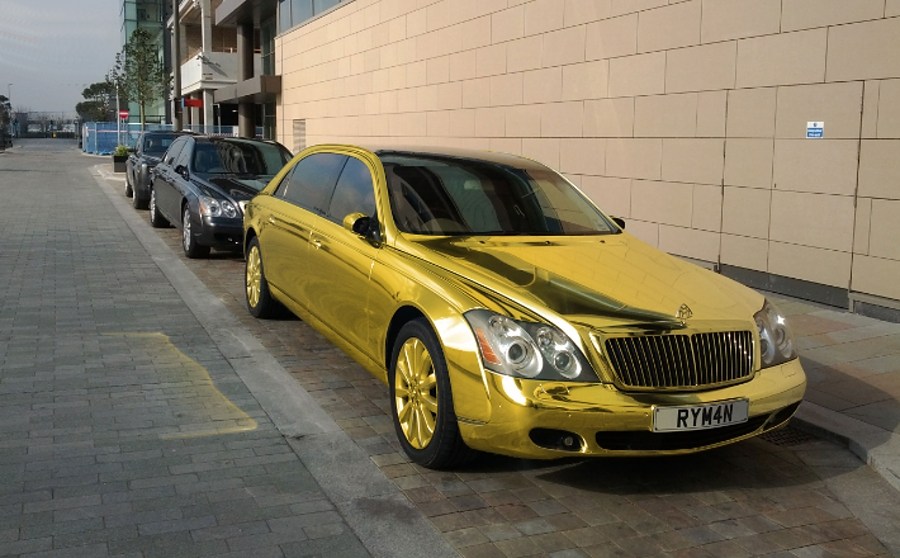 >>> What Are The Most Expensive Cars In Bollywood?