Bugatti is the maker of a few of the most outrageously expensive vehicles in the world. As such, many rich people and celebrities love to own one, just for the snob value. Sadly, no one in India owns a Bugatti car but let's take a look at our list of Indians who own Bugatti cars abroad. All of the listed Bugatti owners are abroad-based NRIs. There has just been one Bugatti owner in India, and he was J.R.D Tata. He was one of the first owners of an absolutely beautiful Bugatti 2000cc. Other than that, nobody in India owns a Bugatti. There has been just one Bugatti Veyron in India, which came for road-testing, got stuck on a speedbreaker, went viral on the internet, and then went back to the factory. Quite funny, but also disheartening that not a single celebrity or businessman in India decided to buy a Bugatti instead of the regular crowd of Maybachs, Bentleys, and Rolls Royces. 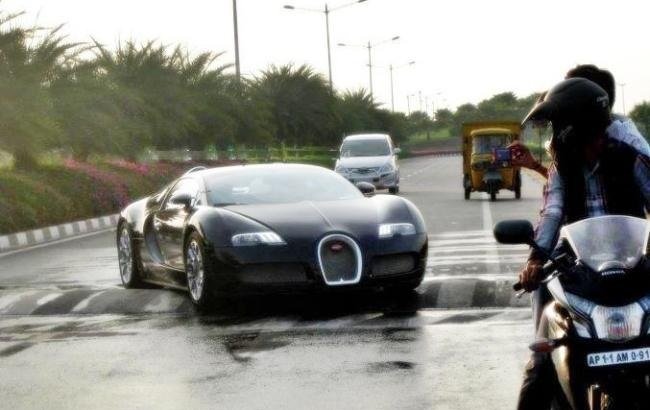 There, however, are a few Indians living abroad who actually keep a Bugatti in their garage. Here, we’ll tell you about the Indian-origin people who are proud owners of Bugatti vehicles.

First on our list of Indian Bugatti owners is Reuben Singh, an Indian-origin British entrepreneur. He is the CEO of contact alldayPA and Isher Capital. Reuben Singh’s love for cars has been the headline of many news stories. Last year in February, Reuben had bought six different Rolls Royce cars in different colours to match with the colour of his turbans. He later bought 3 Rolls Royce Cullinans as well, all completely customised according to his tastes. He is a proud owner of a red-and-black coloured Bugatti Veyron 16.4, one of the most expensive cars in his garage. Other than the above mentioned Rolls Royces and Bugatti Veyron, Reuben Singh also has in his garage a Pagani Huayra, Lamborghini Huracan, Ferrari F12 Berlinetta, along with the automotive holy trinity of Ferrari LaFerrari, McLaren P1, and a Porsche 918 Spyder.

Mayur Shree is a US-based NRI businessman. He is a Real Estate mogul in Dallas, Texas. To get the Chiron delivered in Texas, Shree had to network with Volkswagen executives and even assure Bugatti executives that he is not only an investor but a true connoisseur of supercars, as the French carmaker is concerned with only letting true appreciators buy the hypercar. After paying a $250,000 deposit and waiting for 2 years, Shree was finally able to take delivery of the $3 million Bugatti Chiron in 2018, which he then presented as a gift to his father. He is also the first Indian to own a Chiron. Dr C.J Roy is a Dubai-based-Indian-Origin Real Estate tycoon. He is the founder and owner of Confident Group. Roy also appeared on Forbes’ list of Top Indian business owners in the Arab world in 2018. He has a custom-painted blue-and-chrome Bugatti Veyron is his garage of mind-blowing cars. The Veyron is powered by a quad-turbo 8.0-litre W16 engine, producing upwards of 1001PS of max power. Apart from the custom-painted Bugatti Veyron, Roy also owns a few Rolls Royces, Lamborghinis, and a Bentley. His collection also has a Ferrari 458, a McLaren 720, and a Koenigsegg Agera. Not only that, but even his garage, the actual garage where Roy keeps his cars, is a beautifully crafted work of art.

Yes, we know, J.R.D Tata died in 1993, but he was the only Indian ever to own a Bugatti in India. As such, we decided to include him on this list. Jehangir Ratanji Dadabhoy Tata was the son of Ratanji Tata, cousin of Jamsetji Tata, one of the biggest Indian industrialists and the founder of Tata Group. Jehangir’s mother, Suzanne Brière, was a French lady, and thus he spent most of his childhood in France. J.R.D Tata was also a fan of fast cars. The most prized vehicle in his garage was probably his Bugatti 2000cc. In fact, the Bugatti was the subject of much controversy, after Tata was accused of driving his ride too fast on Mumbai’s Marine Drive. Tata later married the niece of the lawyer who overlooked his case.