The compact sedan segment in India witnessed a cumulatively 24,791 units sales in November 2019, with the Maruti Dzire getting more than 50% share. That said, Maruti Dzire has created quite a fairytale success story in the Indian market. It is not only clocking a decent sales number in the compact sedan segment but also becomes a best-selling car of India with more than 2 million unit sales ever since it’s launched. 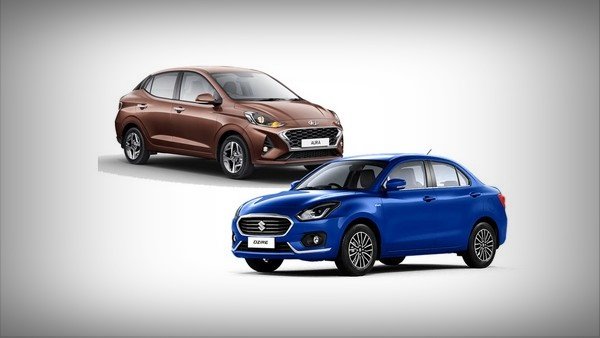 The country’s second-largest automaker, Hyundai Motor, won’t stay outside the game. We’re going to see the bad blood between Maruti Suzuki and Hyundai which would be in the form of the competition between the segment-leader Maruti Dzire and the new soldier Hyundai Aura. Hyundai recently introduced to the public its new Aura compact sedan which is the successor of the Hyundai Xcent in the company’s portfolio. Whether the new Aura sedan would help the carmaker bolster its position in the highly competitive sub-four-metre sedan segment? Could the new Hyundai Aura hog the limelight of the successful Maruti Dzire in the market? Let’s make it out in this Hyundai Aura vs Maruti Dzire comparison.

2. Hyundai Aura vs Maruti Dzire Dimensions: Which Is Bigger?

Hyundai Aura and Maruti Dzire share the same length of 3,995 mm and the wheelbase of 2,450 mm. The Aura measures 1,680 mm in width that is essentially 55 mm narrower than the Dzire counterpart. However, in terms of height, the Aura is slightly higher than the Maruti Dzire by 5 mm. The Maruti sedan now measures 1,515 mm in height while the Aura comes up with the height of 2,450 mm. The new Hyundai’s boot capacity has been decreased by 5 litres compared to the Hyundai Xcent and now gets 402 litres of the boot lid. Nonetheless, it still offers 24 litres of boot space more than Maruti's offering.

3. Hyundai Aura vs Maruti Dzire Design: Which Is Better Looking?

In its production form, the all-new Hyundai Aura has been wrapped off with quite a stunning exterior design. As reported earlier, the new Aura is developed on the recently-launched Grand i10 Nios hatchback and a successor of the Xcent sedan sibling. Flaunting the brand’s new “Sensuous Sportiness” design philosophy, the Hyundai Aura comes with an aggressive face that features a blacked-out trapezoidal front grille with integrated twin boomerang-shaped LED daytime running lamps, projector fog lamps along with a prominent central air dam. That said, the front fascia of the Aura is quite a reminiscent of the Hyundai Grand i10 Nios but the new sedan differentiates itself with the hatchback from the C-pillar onwards. The Aura gets a completely revised rear profile with a glossy black applique on the C-pillar, giving the sedan a floating roof effect. The rear end boasts of a pair of distinctive C-shaped tail lamps with LED treatments, a bumper-mounted number plate holder, a shark fin antenna and more. Hyundai offers the Aura with a set of 15-inch diamond-cut alloy wheels but for the top-spec variant only. On the other hand, the Maruti Dzire turns out to be more “desirable” and mature than the newly-unveiled Hyundai Aura for some reasons. It is more than a three-box design sedan, to say the least, not gorgeous but attractive enough to carve a deep position in the onlookers’ hearts and minds. While the Hyundai Aura looks much like a hatchback slapped on with a boot, the Maruti Dzire comes off as a posh-looking compact sedan whose boot neatly integrates with the rest of the model. The Maruti compact sedan features a large chrome surround front grille with sweptback headlamps and LED DRLs upfront, adding more to the premium quotient of the model. The fog lamps housing looks deeper and more angular than that of the Aura. The diamond-cut alloy wheels are the most striking part of the Dzire when looking at the car from the side. That said, it is something that looks more lavish than the one seen in the Aura sedan. Overall, the design of the Maruti Dzire is elegant and pleasing that stands out from the rest of the competition.

Until now, Hyundai still keeps its mouth shut about the interior of the Aura. The cabin and dashboard layout of the new sedan has borrowed the interior cues from the i10 Nios sibling, save for some subtle cosmetic changes. The recently launched subcompact sedan is equipped with some Nios’s interior bits like an 8.0-inch touchscreen infotainment system with Android Auto and Apple Carplay connectivity, along with a digital multi-information display unit, wireless charger, etc.

The interior of the Maruti Dzire is as fresh and elegant as the exterior. While carrying forward the beige-black theme of the predecessor, the latest-gen Dzire gets an all-new design on the inside. Inside the cabin of the Maruti Dzire, we are impressed by the decent upmarket feel all through the corners. The dual-tone dashboard gets a black top and beige-coloured lower part that makes a great mix with the wooden garnishes. The flat-bottom steering wheel also looks incredibly nice with wooden finish in the lower part while the integrated touch buttons are of high quality. The instrument cluster feels crisp and sporty at a zero degree position. The Maruti Dzire has a very practical and comfortable cabin. It is easy to use, comfortable to drive and even spacious to operate. In a nutshell, the interior of the Maruti Dzire is simply the best in the segment from all aspects so it would be tough for Hyundai to build the Aura in a way better than what Maruti Suzuki has achieved.

4. Hyundai Aura vs Maruti Dzire Engine Specs: Which Model Is Better In Terms Of Performance?

The new compact sedan by Hyundai looks really compelling with three engine options – two petrol and one diesel engines underneath the bonnet, all conforming to the upcoming BSVI emission norms. Prospective buyers would also have a range of engines and gearbox combinations to choose from as it makes use of either a 5-speed MT or a 5-speed AMT unit. The Maruti Dzire comes with two engine option including a 1.2-litre petrol and a 1.3-litre diesel engine in its heart. Do note that Maruti Suzuki has revealed its plan to discontinue all diesel engines ahead of the BSVI rollout. The 1.2-litre petrol engine, in the meantime, has been upgraded to the stricter BS6 norms already.

In the petrol guise, the Hyundai Aura adopts a tweaked version of the Xcent’s 1.2-litre naturally aspirated gasoline engine that pumps out 83 PS of power and 114 Nm of torque. A 5-speed manual transmission is available for this engine as standard while a more economical AMT is optional on offer in place of the torque converter of the Hyundai Xcent. Also, the Aura comes with a 1.0-litre direct-injection turbocharged petrol mill powering the successful Venue SUV, albeit making a lower state of tune of 100 PS/172 Nm. This engine is mated to a 5-speed manual gearbox exclusively. When compared with the Maruti Dzire’s 1.2-litre petrol motor, the Hyundai’s unit appears like a direct match for the Maruti offering. The 1.2-litre oil burner of the Aura also manages to match the Dzire’s 1.3-litre unit that is tuned to generate 75 PS and 190 Nm of torque and comes coupled with a 5-speed MT/ AMT, too. To recap, the Dzire is set to lose its diesel engine before the April 2020 deadline that would give the new Aura sedan an edge in the competition.

Also Read - Best Cars Between 10 to 15 Lakhs in India With Prices, Specs

6. Hyundai Aura vs Maruti Dzire Top Speed: Which Is Faster?

Even after the Aura’s launch, the top speed of the Hyundai car remains unknown. The Maruti Dzire, meanwhile, gets a claimed top speed of around 140 kmph and can travel up from 0 to 100 kmph in around 12.6 seconds.

The Maruti Dzire is really a fuel-efficient product. The ARAI-rated fuel mileage figure of the Dzire is at 21.21 kmpl (for the petrol variants) and 28.40 kmpl (for the diesel models). Fuel mileage of the Hyundai Aura will be revealed soon.

8. Hyundai Aura vs Maruti Dzire Price: Which Is Cheaper?

Also Read - Best Cars Under 8 Lakhs With Specs and Prices

Hyundai Aura is competing with the likes of Maruti Dzire, Honda Amaze, Tata Tigor, VW Ameo and other models in the sedan segment. The car comparisons for these models are coming soon.

Maruti Dzire is now joining the competition with some other vehicles in its segment including the Honda City, Honda Amaze, VW Ameo among others.

11. Hyundai Aura vs Maruti Dzire Verdict: Which Model Is Worth Buying?

In conclusion, both the Hyundai Aura and Maruti Dzire have their own distinctive characters as well as a plethora of unique features on boards. The new Hyundai car itself or the segment-leader Dzire is tailor-made to cater to the demands of a set of customers who are in needs of a modern and practical compact sedan model. Hyundai Aura offers radical styling, loads of equipment, a strong turbo-petrol engine and a diesel engine option in the BSVI compliance. Hyundai Aura has just recently launched in India, therefore it is a bit early to confirm what car is better or which car is worthier to buy at the moment. What we can tell you now is that the Hyundai Aura would face many challenges to emulate the success of the Maruti Dzire in the Indian space.

To compare more cars on the basis of prices, dimensions, features, specifications from various categories, kindly check out the Car Compare section on IndianAuto. For more comparison on Hyundai cars or see how Maruti Suzuki cars compare with other vehicles in their respective segments, stay tuned and updated with our website - Indianauto.com!