Ford EcoSport Gets Fresh Lease of Life With More Character

Ford EcoSport Active Comes with optional packs which add even more features to the already well-loaded sub-compact-SUV. India launch could be pipeline

Ford Motor Company officially unveiled the Ford EcoSport Active compact crossover in select European markets and is a new off-road biased version of the regular Ford Ecosport. Ford is using the new Active suffix nomenclature for its slightly raised ride height and off-road friendly versions of its existing models. The EcoSport Active is the latest addition in the range which also has the Fiesta and Focus active Models. The Ford EcoSport Active comes with increased ride height and gets more rugged black around the wheel arches and bumpers to make sure you’re people know you bought the off-road version of a crossover based on the Fiesta. It rides on new 17-inch dual-tone alloy wheels while the ORVMs, grille, and the roof gets a black finish. Mechanical changes include a tweaked chassis, beefier suspension, and the addition of a limited-slip differential.

This new Active model is based on the higher trim levels of the international-spec Ford Ecosport which means it is feature-packed with goodies like an 8-inch touchscreen infotainment system with integrated Android Auto and Apple Carplay, auto headlamps with LED DRLs, cruise control, electrically adjustable mirrors, and a reversing camera for parking. The Active also gets new eco-leather upholstery for the seats. 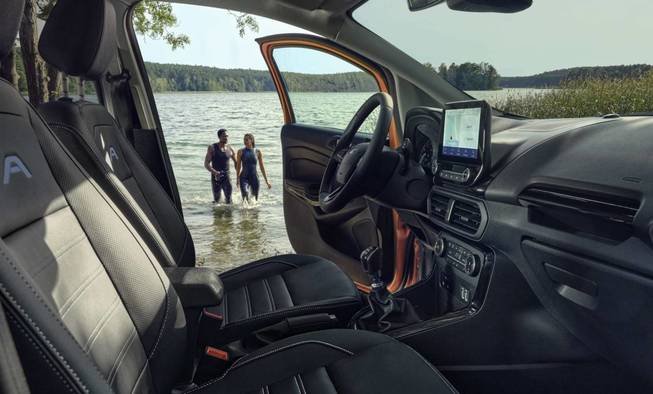 There’s also the Active X pack which you can opt for, which adds keyless entry, auto-folding outer mirrors, and an audio system from Bang and Olufsen. Ford also provides the likes of projector headlamps and a full suite of advanced driver assistance systems as further options. The Ford EcoSport Active is powered by the 1.0-litre EcoBoost turbocharged petrol engine, which was recently made unavailable in India. The engine produces a peak power and torque figure of 123Ps/200Nm respectively and is mated to a 6-speed manual gearbox. Whether the Active EcoSport will end up coming to Indian shores is unconfirmed as Ford is yet to make an official statement.