Tata Sierra is an iconic SUV that made its comeback as an electric SUV concept at the Auto Expo 2020. Tata Motors has already hinted that the Sierra concept showcased at the Expo will enter production in the near future. The concept car was a pure electric vehicle, but one can expect the productions-spec SUV to be offered with petrol and diesel engine options. So far, we’ve seen several renderings of Sierra, which show the expected design of the production model. Now, we've got our hands on a new digital rendering that visualizes the upcoming SUV with proper off-roading gear. 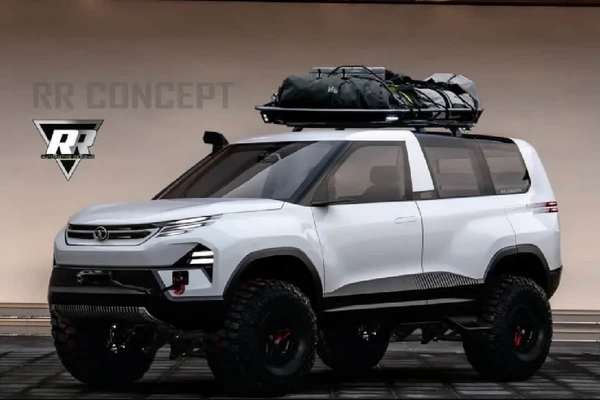 As compared to the original concept Sierra, the rendered model sits slightly higher from the ground

The front fascia of the rendered Tata Sierra off-roader employs a new grille along with sharp-looking LED headlights. The off-road capabilities of the SUV have been enhanced through the addition of a skid plate, large dual-purpose tyres and a snorkel. The roof of the car features an integrated carrier for keeping things like a spare tyre, toolbox, luggage and much more.

As compared to the original concept Sierra, the rendered model sits slightly higher from the ground. This makes the SUV more compatible for off-road surfaces. The upcoming production version of the SUV will be underpinned by company's ALFA ARC modular platform, which will be shared with the Altroz and the production-spec H2X.

The concept car was a pure electric vehicle, but one can expect the productions-spec SUV to be offered with petrol and diesel engine options

We expect the overall length of the production-spec SUV to be above 4.3 meters. Talking about carmaker’s further plans, Tata will launch Gravitas (7-seater Harrier) in our markets in the coming months. The all-new SUV will derive power from a 2.0-litre, four-cylinder oil-burner that produces power and torque outputs of 170 PS and 350 Nm. The same engine does duties in 2020 Tata Harrier. Transmission duties will be done by a 6-speed MT and optional 6-speed torque converter automatic gearbox.