10 Most Expensive Cars Of Bollywood

Bollywood stars are not only well-known for their luxurious lifestyle but also for their high-end vehicles. Here is a list of 10 most expensive cars of Bollywood

The wealthy and famous have always driven luxury vehicles around, Bollywood stars are not an exception. They own many luxury cars which only appear in normal people's dreams. Generally, the costliest cars in Bollywood are manufactured by Bentley and Rolls Royce but sometimes, several exceptions occur. Below, we have listed 10 most exorbitant Bollywood celebrity cars and have arranged them in the order from the most expensive one to the least expensive one for your convenience of reading. If you are interested in celebrity car collection not only in India but also all over the world, pay a visit to IndianAuto.

The most expensive vehicle in this list of Bollywood celebrity cars is Hrithik Roshan’s Rolls Royce Ghost. This Rolls Royce Ghost was gifted to Hrithik Roshan by himself as a present for the 42nd birthday of the male star. Being a Ghost Series II, this vehicle features an overall blue paint scheme and the silver bonnet. At that time, the car was priced at INR 5.65 crore. Nevertheless, some modifications have been done to the vehicle, which makes its price amount to INR 7 core.

The vehicle keeps under its hood a 6.6-litre dual-turbocharged petrol motor which can generate a maximum power of 563 BHP and a peak torque of 780 Nm. The vehicle can accelerate from a standstill to 250 kmph in just 4.9 seconds and reach a maximum speed of up to 250 kmph. Hrithik Roshan’s Rolls Royce Ghost is the costliest vehicle in the list.

The first Rolls Royce Cullinan in Bollywood was owned by Bhushan Kumar. It gets a nice red paint scheme with a silver bonnet. Inside the cabin, the SUV offers all the features that SUV enthusiasts can ask for in a luxury vehicle.

Powering the SUV is a massive 6.8-litre V12 petrol motor which can deliver 580 BHP against 850 Nm. The Cullinan is priced at INR 6.95 crores, but just a few options can result in a much higher amount. Bhushan is a well-known car enthusiast and has brought a wide range of unique cars to India.

Bhushan Kumar is the first owner of Rolls Royce Cullinan in Bollywood.

Priyanka Chopra is the first and also one of the few female celebrities to possess one Rolls Royce car, which is one old-gen Rolls Royce Ghost and is certainly a luxurious car. The vehicle has been modified with a new interesting music system and a large storage capacity. Her garage also includes a BMW 7-series, Mercedes E-Class, Porsche Cayenne and Mercedes S Class, etc.

The Ghost gets its power from a 6.6L dual-turbocharged V12 which can generate 562 BHP against 780 Nm. Transmission duties of the vehicle are implemented by an eight-speed AT gearbox.

Chopra has been spotted to travel in the luxury car to big events quite a few times. Although recently, she is mostly in the USA, whenever she is in Mumbai, the Ghost is always ready for her. Priyanka Chopra usually travels in the Rolls Royce Ghost when she is in Mumbai.

Abhishek Bachchan never hesitates to show his fortune and possessions. He has invested a large amount of money in his garage, which is, actually, the biggest garage in Bollywood with up to 25 vehicles.

Amar Singh presented Abhishek Bachchan with a Bentley Continental GT. This car was again gifted to Abhishek, Amitabh Bachchan’s son, who now proudly owns the car. This Continental GT comes with a white paint scheme. It gets its power from a 6.0L V12 engine which is good for 626 BHP against 820 Nm. 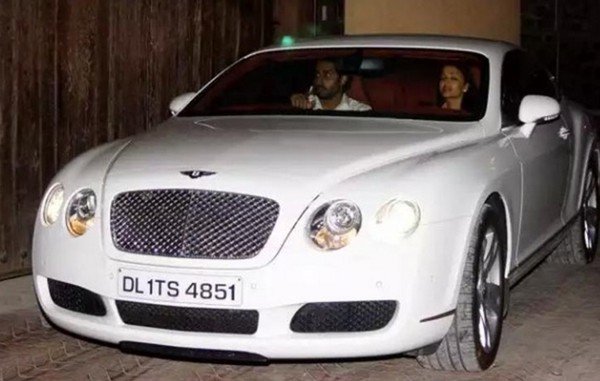 The vehicle is the newest-gen Phantom which was priced at INR 3.54 crore (ex-showroom). The car keeps under its hood a 6.75-litre V12 motor which is coupled with a 6-speed MT gearbox. It must be surprising if Amitabh Bachchan did not own a Rolls Royce Phantom, one of the most popular cars for not only Bollywood stars but also international stars. His Rolls Royce Phantom is the latest-gen model, which was gifted to him by Vidhu Vinod Chopra, a film director, to show his gratitude for the actor’s excellent performance in the film Eklavya.

This Phantom used to be the most expensive one in Amitabh Bachchan’s collection; nevertheless, it has been reported that this vehicle has been sold. The latest entry to his garage is the Mercedes V-Class. The Rolls Royce Phantom has been given to Amitabh Bachchan as a present from Vidhu Vinod Chopra, for his excellent performance in the film Eklavya.

The Range Rover Vogue is delivered to Sanjay Dutt’s garage three months ago; however, he also owns numerous other exorbitant cars. The most costly vehicle in his car collection is a Ferrari 599 GTB which comes with an all-red paint sheme and costs more than INR 3.5 crore.

Powering this vehicle is a powerful 6.0L V12 motor which can deliver a maximum power of 670 PS and a peak torque of 620 Nm, which are both impressive figures, even nowadays. The maximum speed of the car can reach is over 335 kmph. This car is also featured in the film ‘Ferrari ki Sawari’ with Sharman Joshi. Another luxury vehicle owned by Akshay Kumar is the Bentley Continental Flying Spur, which costs INR 3.41 crore at its time. The vehicle keeps under its hood a 6L W12 motor which can generate a maximum power of 616 BHP against a peak torque of 800 Nm. This motor is mated to an 8-speed AT gearbox. Bentley Continental Flying Spur is such a popular vehicle among Bollywood stars that another male celebrity also owns the vehicle: “the biggest movie star in the world” according to Newsweek, Aamir Khan. He possesses a wide collection of luxury automobiles including a Ford EcoSport and a super expensive 10-crore Mercedes-Benz S600. It is the bomb-proof and bullet-proof modification that makes the Mercedes-Benz S600’s price fly to the sky.

His Continental Flying Spur features a light blue overall paint scheme. The male celebrity has been spied in this vehicle several times. This means that it is driven by him quite often. The least expensive in this collection of Bollywood celebrity cars is John Abraham’s Lamborghini Gallardo. Having a great interest for not only cars but also bikes as well, he is the owner of a black Lamborghini Gallardo, which is also the most exorbitant vehicle in his collection with a price of over INR 3 crore. His Gallardo gets its power from a 5.2L V10 petrol motor which is good for a maximum power/torque figure of 554 BHP/540 Nm. The Lamborghini Gallardo is the most expensive vehicle in John Abraham's car collection.

Above is a list of some of the most expensive cars in Bollywood celebrity car collection. Which one impresses you the most? Let us know in the comment section below.