19 0
The Kardashian - Jenner clan is arguably the most famous family in Hollywood, and like most rich people, they love glamourous expensive cars, but the K clan takes a step further and gives away quite a few cars as presents.

When you are super rich and money is not a problem, crazy expensive presents are  probably something you would want to give to your loved ones. Especially if you were a member of the supposedly most famous family in Hollywood (aka the Kardashians), over-the-top presents that make the rest of the world drop their jaws to the floor are somewhat expected. Besides the usual bling-bling diamond jewellery and pricey designer bags that are anticipated of celebrities, the Kardashian family does get super creative with their gift ideas. From flower walls, Burger King restaurants, one full night at the Eiffel tower, and companies’ stocks, the Kardashian family members have done them all. And perhaps, the favourite presents they love to give and receive are luxury cars.

It was one fine day in California and Kylie Jenner decided to hide her then boyfriend’s red Ferrari. The ex-boyfriend, Tyga, definitely was not mad because Kylie took away his Ferrari to give him a surprise present, a brand new white Bentley Bentayga. The car reportedly cost Kylie USD 3,00,000 (approximately 2.15 crore) and we guess that amount of money is nothing to Kylie since she will soon be the youngest billionaire in the world as predicted by Forbes. In case you wonder why a Ferrari and a Mercedes-Benz are put in the same category, it is because they were both presents from Tyga to his ex, Kylie Jenner. Rumour has it that the rapper accumulated quite an amount of debt when he was Kylie’s boyfriend and, well, it is not hard even for an outsider to see why. Apart from the lavish presents Tyga gave his then-lover on multiple occasions like a USD-50,000 (approximately Rs. 36.64 lakh) watch, chartered helicopter tour in New York, and a USD-33,000 (approximately Rs. 21.53 lakh) diamond, he spoiled her with 2 luxury cars. One of them was a white Ferrari 458 Italia Spider that had the price tag of USD 3,20,000 (approximately Rs. 2.29 crore), and the other one was a black Mercedes-Benz S600 Maybach that cost USD 2,00,000 (approximately 1.44 crore). Kylie Jenner was gifted a 2.29-crore Ferrari when she turned 18 years old

The black Mercedes-Benz S600 Maybach that had a slightly more comfortable price tag than the Ferrari was bought by Tyga to give to his then lover to celebrate her 19th birthday. The luxury black car draws power from a 6.0-litre biturbo V12 engine that creates 523 horsepower and 612 lb-ft of torque. This car accelerates from 0 to 62 mph (100 km/h) in 5.0 seconds, taking quite some time in comparison with the Ferrari 458 Italia Spider, but the number is still impressive when you take the 5,300-lbs (2404 kg) weight of the car into consideration. 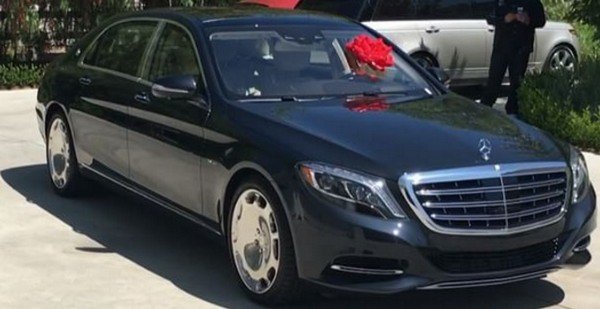 If Tyga got himself in a lot of debts for showering Kylie with mountains of expensive gifts, then her new and current boyfriend, Travis Scott, is somewhere on the same page.

To celebrate Kylie’s 21st birthday, Travis Scott went all out and gave his sweetheart a customised vintage Rolls-Royce Wraith. The pale blue luxury car is reported to have cost Scott close to USD 4,00,000 (approximately 2.86 crore), but Kylie seems to love it so much, judging through her impressions that she posted on social media. Well, truth to be told, no sane person would dislike a vintage Rolls-Royce for a birthday gift. Kylie Jenner, an avid car fan, got a vintage Rolls-Royce as her 21st birthday present from her current boyfriend, Travis Scott

Travis Scott also gifted Kylie a flipping USD-1.4-million (almost Rs. 10 crore) black Ferrari LaFerrari Aperta for giving birth to their daughter, Stormi. The car was no longer in production when Travis purchased it, and he even took the car out for some major customisations like the red leather interior, so Travis’s gift was even exclusive. The Ferrari LaFerrari Aperta is powered by a 6.3-litre F140FE V12 engine that produces a maximum power output of 800 PS (588 kW; 789 hp) at 9,000 rpm and 700 Nm (516 lb-ft) of torque at 6,750 rpm. Kris Jenner is the famous “momager” who builds the whole “Kardashian empire” from the ground up, and all her kids’ success is allegedly all thanks to the momager’s talents in doing business. Therefore, it is only fair when all the children of the Kardashian - Jenner clan joined forces to buy Kris Jenner a classic white vintage 1956 Ford Thunderbird. This vintage Thunderbird had been Kris Jenner’s dream car for a long time, so she was really excited when she received the Christmas present from her kids. Kris posted a picture of the car on Instagram with the caption: “So surprised I seriously have no words for this spectacular gift from my kids......thank you family ❤❤🎅🏼🎅🏼🎄🎄🙏🙏#blessed #family #1956thunderbird #christmasmagic #dreamcar #imaluckygirl”. The girls of the Kardashian family also got their grandmother, aka Kris Jenner’s mother, a vintage Ford Thunderbird in the fiery red colour. The major difference of the two Thunderbirds, other than the difference in colour, is that the red one is still in possession of the grandmother, while the white car was also sold by Kris Jenner just a year after her kids gave her as a Christmas present. Kim and Kanye are probably the most famous couple in the Kardashian empire, and they do not hold back at all when it comes to gifting each other. On their one year anniversary, Kanye rented the whole Eiffel Tower for one entire night, and on some other occasions, Kanye had some super unique gifts to give his wife like 10 different Burger King stores in different countries, stocks of major companies, and a whole wall made of real roses. And on Kim’s part, she bought Kanye a black Lamborghini Aventador LP 700-4 that had the price tag of USD 7,50,000 (approximately Rs. 5.34 crore) on his birthday. To top it all off, Kim Kardashian purchased a miniature version of the very same car for her daughter, North West, as her first Christmas present. North was one, and of course, she could not ride her miniature Lamborghini just yet, but just the idea of father and daughter driving the same car is adorable.