60 0
The car that is tasked with the mission of transporting the President of the United States is called “The Beast”. What is so special about it?

After ten years of serving the most powerful men in the United State, the old United States presidential state car has officially resigned. On September 24th, 2018, President Donald Trump was seen paying a visit to the UN General Assembly in the new presidential state car. The limousine, which is longer than the length of two large SUVs combined, is affectionately known as “The Beast” or “Limousine One”, and it is not difficult to see the reasons for this name.

1. The Beast is a mobile fortress disguised as a limousine

You will not be able to find a limousine that is better-armoured on planet Earth than the presidential state car of the United States. Basically, it is a Cadillac, but I doubt you can find any Cadillac on sale that is anything like this.

The car features 8-inch (approx. 200 mm)-thick doors, none of which has any keyhole, and the way to open the doors on the limousine is a secret kept by the Secret Service. The windows are equipped with 5-inch (appox. 130 mm)-thick bulletproof glass, and the only window that can be opened is the one at the driver’s seat, but it can only open to 3 inches (approx. 76 mm) so that the driver can pay toll through the crack.

The tyres are the ones that are usually used on heavy-duty trucks and they are puncture resistant. Even if one or all four tyres are flat, the steel rims underneath enable the car to keep on running. The whole car is armoured with a steel plate under its body to protect the car and the people inside from bombs and grenades. The fuel tank is armour-plated and it has a special foam that prevents the fuel tank from exploding in any situation, even when it takes a direct hit. The inside of the car can be sealed off completely from the outside and there is oxygen supply onboard in case of a chemical attack. A mini blood bank of about 1 litre is available inside the car with the president’s blood type in case of emergencies.

Besides all the incredible defence functions, the Beast is also good at offence. Since 2009, Limousine One has been armed with night vision optics, rocket-propelled grenades, tear gas cannon. It is also loaded with pump-action shotguns and multi-spectrum infrared smoke grenades.

While the inside and outside of the car can be two worlds that are cut off from each other completely, the President is still able to communicate with the whole world with all the devices that are available at his fingertips such as phones, satellite communications, and the Internet. Thanks to all the heavy apparatuses, the Beast is weighed at 15,000 to 20,000 pounds (approx. 6,800 to 9,100 kg). The Beast is great at both defence and offence

2. The Beast has its own airplane

Whenever the President travels to another location in his Air Force One, the Beast flies with his owner but in an exclusive airplane, which can be a C-5 Galaxy, a C-17 Globemaster, or a C - 130 Hercules. What do all of the airplanes have in common: they are monstrous transport aircrafts that can be friends with and carry the Beast, another limousine, and a heavily armoured Chevrolet Suburban communications vehicle. 3. The Beast is never alone

Rumour has it that the Beast has several identical siblings; some say that there is an identical “twin” and some even say that there are 12 exact same cars as the Beast. While the number and reasons for the existence of the doppelgangers have never been made clear to the public (which we doubt will ever happen), it has been reported that other limousines are used as vehicles for special guests and high-ranking foreign officials when they visit Washington D.C. When in use, the Beast is never physically alone either as there is usually an exact twin, a troop of sweepers, lead car, some heavily-armoured Chevrolet Suburbans (each of which has a different specialized purpose), control vehicles, support vehicles, and a galore of other cars that give it company; the motorcade is especially crowded if the President travels to dangerous locales. 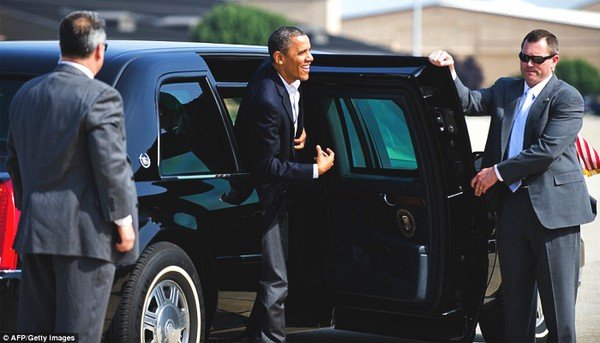 The Beast always has companies