Hyundai is currently the second largest car manufacturer in India, a feat possible because of the company’s portfolio of affordable cars and a wide network of service centres. Over the years, Hyundai has introduced many different products at extremely lucrative price-points, such as Santro, Grand i10, and Xcent. Out of these, the first one was discontinued a few years back and has been reintroduced as a completely new model. The second one has recently been upgraded to a new-generation model, and the last one, the Xcent, is also set to be replaced by a next-generation model, called the Aura. Hyundai Aura has officially been unveiled, although the launch is still pending. As for the Xcent, it will slowly be phased out of our market after the launch of the Aura. If you are looking to buy a new compact sedan and have your heart set on the Hyundai Xcent, should you go ahead and buy it or should you wait for the Aura instead? We answer this question and much more in this comprehensive comparison of Hyundai Aura vs Hyundai Xcent.

2. Hyundai Aura vs Hyundai Xcent Dimensions: Which one is bigger?

The new Hyundai Aura is slightly larger than the Xcent, but only by a tiny margin. The former is 5mm longer and 20mm wider. Surprisingly, the boot is smaller in the Aura by 5 litres. The wheelbase and height are identical in both these cars.

3. Hyundai Aura vs Hyundai Xcent Design: Which one looks better? Hyundai Aura is based on the recently launched Grand i10 Nios. The front profile is largely the same on the Aura as on the Nios, although there are small differences. The headlight design is the same, the front grille is largely the same but spreads outwards towards the bottom. The fake air-vents around the headlamp housing are also slightly different. On the side, the Aura is the same as the Nios except for the tail section. The boot juts ever so slightly out at the end. Also, the diamond-cut alloy wheel sport a different design. The biggest difference lies in the taillight design. The Aura has a funky looking design, as opposed to the conservative-looking taillight on the Grand i10 Nios. The ‘Aura’ name is plastered on the boot, underlined by a strip that runs between (and joins) the two comma-shaped taillamps. The Xcent is based on the previous-generation Grand i10. The front end is, once again, identical in these two. The side profile has a few added millimetres in the Xcent as compared to the Grand i10, but other than that, it’s the same in the two cars. As for the rear, well, the Xcent is much more conservative than the extremely eye-catchy Aura. That could be a good thing for those who prefer subtlety over drama. The taillight units are large and simple, joined together by a chrome strip running horizontally on the boot. The looks are sweet but dated when compared to the Aura. Hence, the new model is the winner of this Hyundai Aura vs Hyundai Xcent comparison.

The interior design and features of the Hyundai Aura are the same as the Grand i10 Nios, but with a darker colour scheme. That said, it looks a fair bit more premium than the interior of the Grand i10 Nios. The dashboard design is simple yet elegant. The Aura sports an 8-inch touchscreen infotainment system that juts upward from the dash and joins into the instrument console. Speaking of instruments, you will also find a semi-digital console here with a digital speedometer, trip meter, odometer, and fuel gauge, and an analogue tachometer. As for Hyundai Xcent, the interior is sweet and simple, but next to the Aura, it seems a bit, well, last decade (Haa! Get it? Yes, it's a bad joke). That doesn’t mean it’s bad though. In fact, on its own, the Xcent looks nice. The dashboard design is simple and the 7-inch touchscreen is very neatly integrated.

The space inside is great, and from the inside, you would never know how tiny this car is in actuality. The seats are quite supportive, and there is enough space for four people to sit in comfort. There is a lack of under-thigh support in the rear though, which could be a bother, especially for taller passengers.

4. Hyundai Aura vs Hyundai Xcent Features: Which is safer and convenient?

Hyundai Aura offers a lot of safety equipment as well, including Anti-Lock Braking System (ABS), Electronic Brake Force Distribution (EBD), dual front airbags, seat-belt indicator, door-open warning, and over-speeding warning as standard, along with a few more features. As for the Xcent, it offers safety features like ABS, EBD, dual front airbags, front fog lamps and rear foglamps. You also get rear parking sensors on all variants and a rear parking camera with display on the inside rearview mirror.

The Aura sedan features the same infotainment unit as the Grand i10 Nios, an 8-inch touchscreen unit. In the lower variants, this unit will be replaced by a simple radio/CD player with AUX input. On the Xcent, there is a 7-inch touchscreen infotainment on offer on higher variants, and a radio/CD player on lower trims. There are cup holders for both the front and rear passengers, and you also get rear AC vents. Sadly, there is no USB charger, only a 12-volt socket. Rear passengers also get a reading lamp and rear headrest (non-adjustable). The front passengers get automatic climate control and there is also adjustable steering on offer. Here, again, the new model is the winner of this part of our Hyundai Xcent vs Hyundai Aura comparison.

Also Read: Hyundai i10 Electric In The Works

5. Hyundai Aura vs Hyundai Xcent: Which car stands out in terms of performance?

Hyundai A  vs Hyundai Xcent (Petrol)

The Aura features the same 1.2-litre engine as the Nios, with a choice of manual and AMT gearbox. The 1.0-litre turbo-petrol from Hyundai Venue is also available here, but in a lower state of tune, paired to a 5-speed manual. There is a small chance that Hyundai may offer this engine with a DCT as well, just like the Venue. The Xcent is only available with one petrol engine option, a 1.2-litre 3-cylinder unit. It comes paired to a 5-speed manual.

6. Hyundai Aura vs Hyundai Xcent Price: Which car is cheaper?

Prices of Hyundai Aura range between Rs. 5.79 to 9.23 lakh (ex-Showroom). This puts it at a comfortable premium over the Xcent, which is not only cheaper, but also available with a lot of discounts at the moment!

9. Verdict: Which model worth buying – Hyundai Aura vs Hyundai Xcent If you’re looking for a good deal, or if you want an immediate purchase, you just can’t go wrong with the Hyundai Xcent. It is extremely affordable, yet decently spacious. As it is soon to be discontinued, the available units can be had for a considerable discount as well. If, however, you want a slightly modern and premium touch to your car, you should definitely wait for Hyundai Aura. As it usually is with newer models, the Aura is the superior car, even if more expensive. From our comparison, it's quite clear that the Aura is the clear winner of our Hyundai Aura vs Hyundai Xcent comparison. 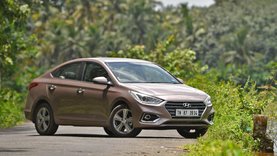