The Renault Triber, a Kwid-based MPV, is scheduled to be launched next month. Here is our detailed Renault Triber Vs Renault Kwid Comparison to give you an idea of how this two compare on aspects like Price, Specifications, Interior

First launched in the Indian auto market in 2015, the Renault Kwid became a breakthrough for the French auto manufacturer. The hatchback has an elegant styling and a wide range of top-notch features. Thanks to this hatchback, the sales of Renault improved to a considerable extent. Nevertheless, as time goes by, the Kwid has lost in its popularity and has negatively impacted the total Renault sales. To curb this problem, Renault has decided to give the Kwid a facelift last year with both changes from inside out.

The Triber is expected to be the second MPV for the Indian auto market after the Lodgy. Revealed at a recent international premiere in New Delhi which transpired on June 19, 2019, the Renault Triber took the whole car community aback with its ultra-spacious cabin which offers the utmost comfort and convenience. Actually, in the sub-4-metre segment, it gets the most amber passenger cabin.

The Renault Triber will be developed under the partnership between Renault’s plants in India and France and specifically designed for India. Despite being based on the Renault Kwid, the Triber will have its own identity with some unique features, some of which are expected to be segment-leading ones which will help distinguish itself from other vehicles in the same segment. Let’s come to a detailed Renault Triber vs Renault Kwid comparison to find out the similarities and the differences between the two vehicles.

While the Renault Triber’s exterior design is a combination between an MPV and an SUV, that of the Renault Kwid is typical of a hatchback. Although the former borrows the platform from the latter, it has its own identity with unique features.

The Renault Triber will get many SUV-ish features, which contribute to its bold stance. The front will follow the newest design philosophy of Renault with a bold V grille which is decorated with numerous chrome components. On the two sides of the grill are the two projector headlamps, which give the car a robust appearance. LED DRLs and fog lamps are also mounted to the lower front of the Triber, giving it a premium look.

Despite not looking exactly the same, the grille on the Kwid also gets many chrome components and looks bold. Moreover, it is also equipped with C-shaped halogen headlights, a masculine bumper and round fog lights, which have been carried over from the previous model. The Renault Triber's front will follow Renault's newest design philosphy to set it apart from the Renault Kwid.

One of the most striking differences between the two Renault vehicles is their wheels. While the Renault Triber gets a 5-spoke steel pressed rims which measure 14 inches in the lower-spec trims and 15 inches in the higher-spec variants, the Kwid runs on 3-spoke wheels with a smaller size, only 13 inches. Moreover, whereas the Triber offers coloured ORVMs which are integrated with indicators, the Kwid is equipped with silver ORVMs. On the side profile, the most disctinctive feature between the two vehicles is the wheels

The rear of the Triber is packed with multiple chrome elements on the bold letter ‘TRIBER’ and sleeking wide tail lamps, a faux skid plate on the bumper, which help the rear become harmonious with the front. On the other hand, the Kwid is equipped with wraparound taillights, plastic rear bumper. One of the most noteworthy updated features in the facelifed Kwid rear is the addition of a rear-view camera and a first-in-the-segment rear parking camera.

Since exterior design is a matter of personal preference, we will save the voting for the winner for the latter sections. However, if we still have to make a decision, we would like to choose the Renault Triber for its breakthrough in the design despite being based on its elder sibling. Moreover, the SUV-ish design of the vehicle will be more attractive to Indian auto buyers than the Kwid. Like the two other angles, the rear of the two vehicles bear little resemblance to each other.

Since the Renault Triber is an MPV, one of its most unique selling points is the greatly practical and amber cabin. Actually, the Triber gets the roomiest cabin in its segment. The Kwid comes with only one seating configuration with a 300-litre boot space. Nevertheless, the Triber is available with three seating configurations: 7-seater (all the seats are in their place), 6-seater (the third seat row is removed) and 5-seater (the second and the third seat rows are removed) with a cargo space of 84 litres, 320 litres and 625 litres, respectively. The Renault Triber comes with the most amber cabin in its segment.

In comparison with the Kwid, the Triber comes with a more premium dashboard with a wide array of cutting-edge features such as an 8-inch touchscreen infotainment system which is integrated with Apple Carplay and Android Auto connectivity. This is one of the widest units offered by a car which costs under INR 6 lakh in India.

Some other outstanding interior features of the Triber include an all-digital speedometer, a 3.5-inch MID which displays various information as regards the car operation, start/stop push button, powered windows, AC vents and keyless entry. The car will also offer 12V charging ports in all three seat rows, seatback pockets, a roomy cooled glove box, etc, which greatly contribute to the practicality of the MPV. 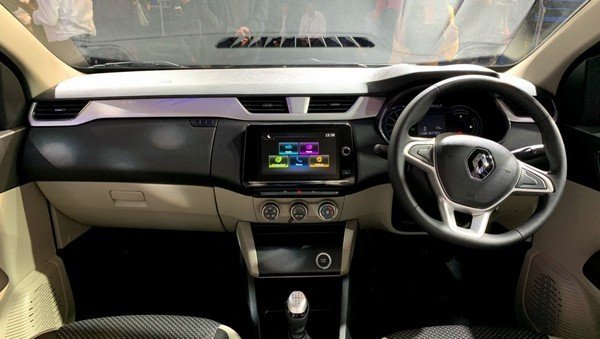 The Renault Triber is equipped with a wide array of cutting-edge features, some of which are segment-leading ones.

Regarding the Renault Kwid, the hatchback is also equipped with a long list of top-notch features but somewhat outdone by the Triber. The dashboard of the Kwid features a 7-inch touchscreen Media NAV (navigation) infotainment system, which is the first-in-the-segment feature, which displays everything from the rear-view camera and the rear parking camera. However, this system is dwarfed by the Triber by one inch. Other prominent interior features include a leather driving wheel and a glove compartment, etc. 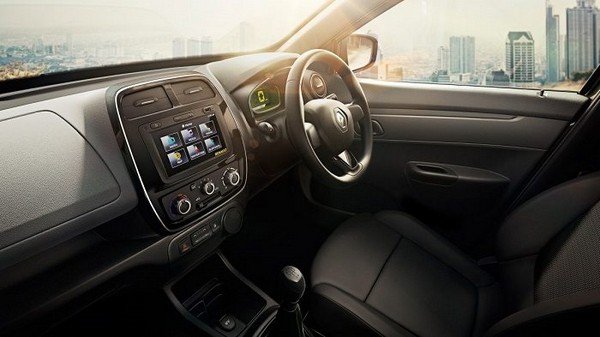 Being an entry-level hatchback, the interior features available on the Kwid are outdone by the Triber.

Some of the similar features between the two vehicles include an all-digital speedometer and 12V charging sockets.

Here is the aspect where the Renault Kwid is far exceeded by its younger brother since the Renault Triber offers much greater safety with a much wider variety of safety features. To be more specific, the Renault Triber is equipped with four airbags, which is another segment-leading feature, a speed alert system, seatbelt reminders for two front occupants, rear parking sensors and three-point seatbelts for all the seat rows.

On the other hand, the Renault Kwid offers just very standard safety features such as only the driver airbag, seatbelt alert, a rear-view camera and a parking camera. Fortunately enough, with the facelifted model, the rear seatbelts now get standard load limiters and pre-tensioners.

Overall, in terms of the interior, the Renault Triber deserves to get the winning position here, thanks to the practicality, comfort and safety that it offers.

Since the Renault Triber is a 7-seater MPV and the Kwid is a hatchback, the Triber dwarfs the Kwid in all dimensions. While the greatest difference happens to the their length with Triber exceeding the Kwid by 311 mm, the smallest distinction occurs to the ground clearance with the former surpassing the latter by 2 mm.

Under the hood of the Renault Triber will be only a 1.0-litre 3-cylinder naturally aspirated petrol motor which is good for 72 HP/96 Nm which is 5 HP/5 Nm higher in comparison with those produced by the same motor on the Kwid. Moreover, the Kwid is also powered by a smaller 0.8-litre gasoline burner which generates 54 HP against 72 Nm. The transmission duties on the two vehicles are undertaken by either a 5-speed MT or an AMT unit.

In this aspect, the two vehicles level with each other. While the Triber offers a more powerful engine, the Kwid comes with a wider variety of engine options.

With a wide range of top-notch features including some segment-leading ones. No wonder why the Renault Triber will be priced at a higher range than its elder sibling. That said, considering the prices of its competitors in the Indian auto market, the expected price Renault Triber is quite aggressive, which ensures the competitiveness of the MPV.

Overall, the Renault Triber, a Kwid-based MPV, has its own unique exterior and interior design. It offers super large cargo space, especially when the second and third seat rows are removed. In the meanwhile, the Kwid is also equipped with a wide range of features but they seem to be outdone by those on its counterpart. If you prefer a 7-seater people mover with an amber boot space and numerous cutting-edge features, go for the Triber. On the other hand, if you only need an entry-level hatchback and are on an under-INR-5-lakh budget, the Kwid is the ideal option for you.

Above is a detailed Renault Triber vs Renault Kwid comparison. Hope that this post will help you make a better decision once you have to choose between these two cars. For more comparison articles like this, please pay a visit to IndianAuto.