The Kia Sonet will be available with multiple engine-transmission choices along with several class-leading features like a Bose sound system and a 10.24-inch large-screen infotainment unit

Kia Motors India recently took the cover off the Sonet – a much-awaited offering for the sub-4m SUV segment. While the South Korean brand has witnessed a notable success with the Seltos and Carnival, the all-new Kia Sonet is believed to be worthy of helping the company grab a much bigger pie, given the strong demand for sub-4m SUVs. Ahead of the Kia Sonet launch set for next month, a leaked brochure has revealed all details about the interior, dimensions, variants, engine specs and features of the Sonet. The much-anticipated Kia Sonet SUV will be loaded to the brim with features and technology to make it a better deal than the competition. 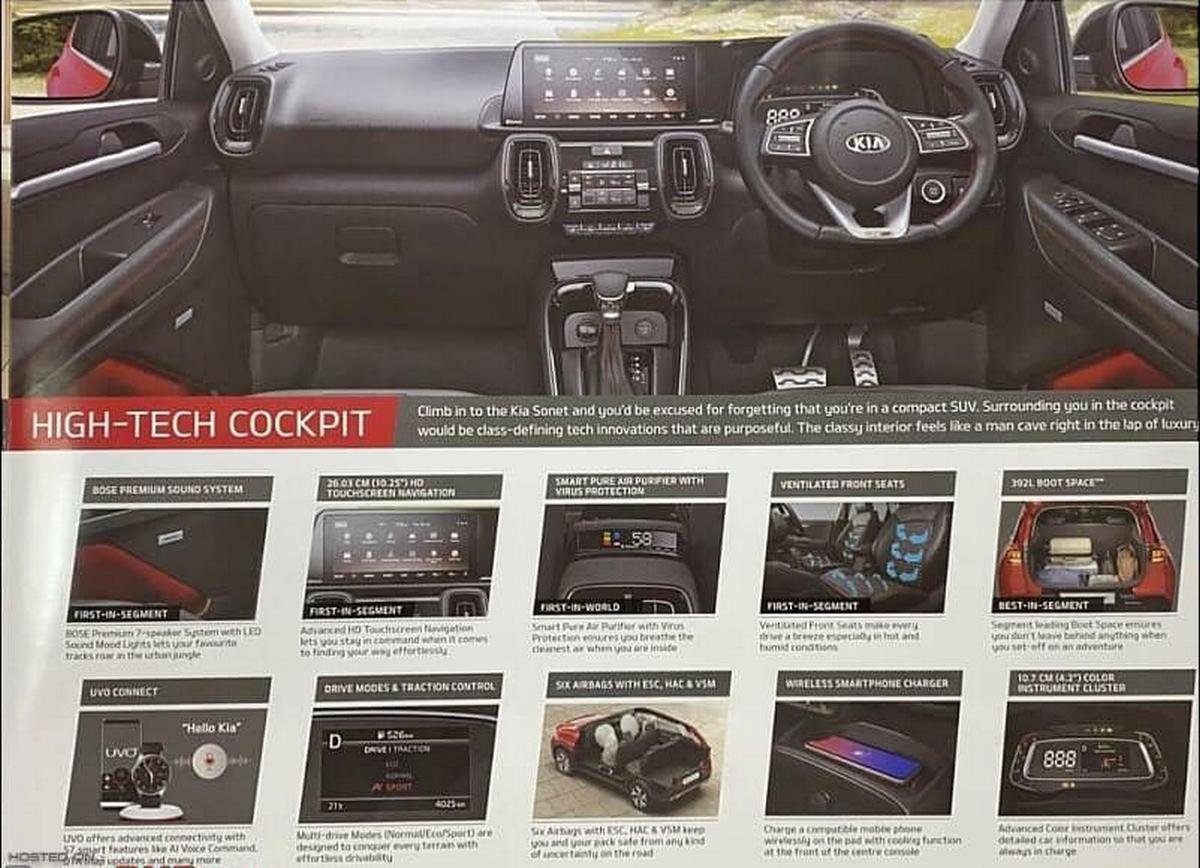 Of the Kia Sonet features, many are firsts in the segment. It will come with the class-leading 10.25-inch touchscreen infotainment system with Android Auto and Apple CarPlay supports, air purifier with display and ventilated front seats. UVO connected car tech that offers as many as 57 comfort features, power sunroof and wireless mobile charging system are also highlighting features on the Kia Sonet interior. As for the Kia Sonet specifications, the brochure scan reveals that the upcoming SUV will be equipped with 2 petrol and 2 diesel engine options. The petrol models will come with a 1.2-litre 4-cylinder engine producing 83 PS/ 115 Nm along with a more powerful 1.0-litre 3-cylinder turbocharged unit good for 120 PS and 172 Nm of peak torque. The former will be available with a 5-speed manual transmission only while the turbo-petrol will come sans manual gearbox option and paired with either a 6-speed iMT or a 7-step DCT unit instead.

Also, the Kia Sonet will be powered by a 1.5-litre 4-cylinder diesel engine that also powers the Kia Seltos. For the Sonet, this motor will be available in two different states of tune- 100 PS/240 and 115 PS/ 250 Nm. Transmission choices for the former is a 6-speed manual gearbox while the latter will come mated to a 6-speed torque-converter automatic transmission unit. The upcoming Kia Sonet will be available in two trims: Tech line and GT Line. The sportier GT Line will be packed with drive modes – Normal, Eco and Sport, along with traction control, tyre pressure monitoring system with front parking sensors, full LED headlamps and tail lamps among many others.

Details of the pricing of the Kia Sonet are yet to be known but it is promised to be the most affordable offering by Kia in the Indian market. The 2020 Kia Sonet is expected to be priced in between Rs 7 lakh and Rs 12 lakh (estimated, ex-showroom). The Kia Sonet will take on the likes of Hyundai Venue, Maruti Vitara Brezza, Ford Ecosport, Mahindra XUV300 and Tata Nexon.