Our 2019 Toyota Rush Review details the popular SUV that would rival the likes of Maruti Ertiga, XL6, Mahindra Marazzo and Honda BR-V once it's launched in India

SUVs have taken up the automobile world by quite a storm. Thanks to their rugged nature, all-road capabilities and commanding driving position, these vehicles have managed to divert almost every car buyer towards themselves. Toyota has already plotted the success story for the Fortuner in the Asian market. But given for its price tag, many can’t afford to buy one here in India. However, this fact seems to be left unheard by Toyota. While the Indian consumers have always been attracted towards the compact and mid-size SUV segments, Toyota is yet to bring an SUV that can be positioned below the Fortuner. Interestingly, the manufacturer sells a compact SUV in certain Asian markets under the Rush nametag. Our 2019 Toyota Rush review here should give you a fair idea about this vehicle. The Rush is a 7 seat mid-size SUV and is also sold as Daihatsu Terios in some market.

The latest-gen Toyota Rush was expected to come to India in 2018. It did come, but only as a test prototype. Since then, the Rush name disappeared somewhere between the rumours relating to the arrival of some other potent mid-sizers. No sadness here, Rush is still on cards and could be launched once the BS-6 emissions norms come into play. Now, the Rush is in its second generation and things are a lot more appealing than before. The Rush is a decently sized crossover that can seat 7, it's is based on a strong platform, gets power from a reliable motor and comes loaded with dollops of SUV character. So, rush a scroll and read more about this SUV in our 2019 Toyota Rush review here.

The 2019 Rush follows the design language seen on the new Fortuner. In comparison to its previous generation, modern is what new Rush can best be described as. But, the MPV-silhouette has been revamped with too much aggression with the use of black cladding and other SUV elements. Hence, the 2019 Toyota Rush feels a little overdone at some points. The Rush is a fairly large car, almost the size of a Maruti Suzuki XL6. It measures 4435mm in length, 1695mm in width and 1705mm in height. The Rush is an aggressively-styled car, but somehow, the docile MPV traits sneak out of its clothes.

An aggressive front-end is attention seeker and does so with the use of an all-black grille, sleek LED headlamps, beefy bonnet and a busy bumper. The Front bumper is finished with black cladding and wears a faux skid plate, giving the Rush a tough face. The silver inserts on the bumper also add a sense of width and character to the car. The lights on the Rush are all LED units, but it does miss out on a pair of DRLs.

Moving to the side, the black cladding, roof rails, and blackened pillars continue with the tough SUV theme. The stubby bonnet, long wheelbase, and a large rear overhang, however, throws hints of its MPV credentials. With 17-inch wheels, the car looks a bit under-tyred. With an SUV-Esque ground clearance of 220mm, Rush is a better-proportioned car than, say, the Honda BR-V.

Also Read - Toyota Rush-based MPV and SUV Likely To Be Launched In India At Rs 15 Lakh. The rear end of the Rush is also hunched-up as the front to give this small car some SUV traits.

The rear-end is similar to the front. The rear fascia is busy yet appealing. The overhang is higher up the ground and is done up in a black cladding. The wrap-around tail lamps are sleek and are all-LED units. The tailgate houses the number plate, since the rear bumper is minimal, which also means repairs would be expensive in case of a rear-end collision. But, loading stuff in the boot would be easy with a low loading lip. The high-set dash is a bit simple and plain but has a few elegant styling touches.

With seats for 7, the Rush comes across as a spacious car. The view from the high-set driver seat is clear and commanding. The dashboard hosts a clean and uncluttered layout. The quality of materials is rich and the dashboard has white inserts that mimic leather with faux stitching all-around it. The centre of the dash is dominated by the 6.8” touchscreen infotainment system which comes with the added convenience of Apple Carplay and Android Auto. With controls of automatic aircon stacked right beneath it, the dash has very upright and minimalist feel to itself. Also, the car gets a total of 13 cupholders scattered across its interiors.

Also Read - Toyota Rush Could Launch In India By 2021. 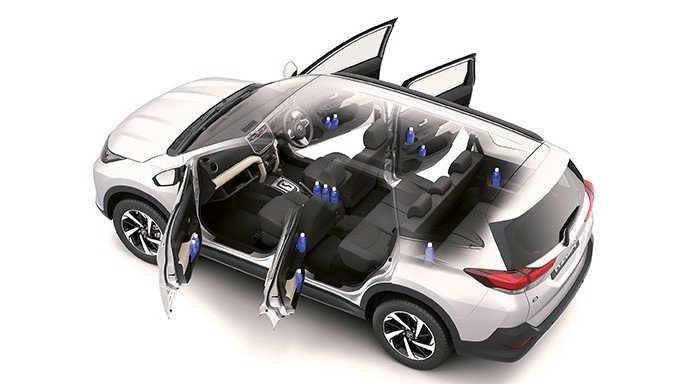 Rush gets a total of 13 bottle holders inside the cabin, that speaks about its logical design.

The second-row seat has a 60:40 split setup and does not get an armrest, which we expect might be present on the India-spec car. The legroom and shoulder room in the second row is generous. The second row also gets roof-mounted AC vents, which would help in bringing down the temperatures in the last two rows. The space in the third row is best suited for kids but can be used by adults on short journeys. The door pads also get the contrast white bolstering as seen on the dashboard.

In international markets, the 2019 Toyota Rush is powered by a 1.5-litre petrol powerplant that produces 105 PS of maximum power and 136 Nm of peak torque. The power is transmitted to the rear wheels with the help of a 4-speed automatic transmission. There isn’t any option of a manual gearbox on offer as of now. The Indian version will surely adopt one to keep the base price down. The Rush with its 220mm of ground clearance is capable enough to tackle some badly paved roads and humongous speed bumps.

Suspended on independent McPherson strut with coil springs, coupled to a torsion bar at the front and 5-link beam with coil spring and lateral rod at rear, the Rush seems capable to haul the weight of 7 in utmost comfort.

With seats for 7, Rush comes with 6 airbags as standard and this would be the case for the Indian car, too.

The Rush is a safe car with 5-star ASEAN NCAP rating and abundant passive safety systems like, 6 airbags, ABS with EBD assistance, Isofix seat mounts on the second row, front and rear parking sensors, seat belt reminders, traction control, vehicle stability control, hill hold assist, rear cross-traffic alert, blind-spot alert on the ORVMs, and impact sensing auto door unlock as standard fitment across the range. The Pre-Collision System, which is capable to bring the car to stop as it approaches a stationary object is, however, only available with the top-end variants.

In the international markets, Toyota sells the Rush with a price tag of around Rs 15.7 lac (93,000 RM). The stylish model rivals the likes of Honda BR-V and Proton Ertiga. The Honda BR-V is also on sale in India, while the Proton Ertiga is the previous generation of Maruti Suzuki Ertiga that was sold until early-2019.

Also Read - Here Is One Of The Boldest Modified Toyota Fortuner SUVs Around.

Once launched in India, the Toyota Rush will compete with the likes of Maruti Suzuki XL6, Ertiga, Honda BR-V and Mahindra Marrazzo. With dimensional homogeneity to the XL6 and BR-V, Toyota will have a strong contender to take on these rivals with the Rush’s SUV characteristics. Expected to cost at least INR 10 lacs in India, the Toyota Rush could do with a similar success story as the Innova and the Fortuner