The detailed guide on how to clean the engine bay

Let's make your car clean from inside out with this easy-to-do engine cleaning guide.

1. Why do we have to clean the engine bay?

Look at the engine bay before and after cleaning

The removal of grimes and grease on the engine will better the performance of the engine. A periodical engine bay cleaning could also extend the lifespan of the engine. Being covered in grease will make it harder to emit the heat from the engine. It also makes it easier to spot the leaks and damages to the engine.

The frequency of engine bay cleaning depends on the condition of the car engine. For example, normally, you should clean the engine every six months or every year. If the engine gets dirty quicker due to the rainy weather, you can have to clean your car more frequent than usual.

2. How to clean the engine bay?

Step 1: Wait for the engine to cool down

Before moving toward any cleaning step, you have to make sure that the engine bay is cool off. Cleaning the car with cool water will create an instant temperature change, which is unhealthy for the engine. It will lower the lifespan of the engine components. Therefore, you have to wait until the heat releases.

Using water to clean the engine bay takes the risk of harming the sensitive electrical connections or wiring under the hood. To minimize the intrusion of water into these part sacred parts, you should take a preventive approach: cover or wrap all the electronics, the distributor, carburetor and the air intake systems and other exposed wiring with plastic bags. Even being hide under the bonnet, the engine bay still gets caught by the dust and contaminants, especially grease – which is a stubborn substance.

Tips on how to use a degreaser:

Step 4: Use a brush to rub the dust off. 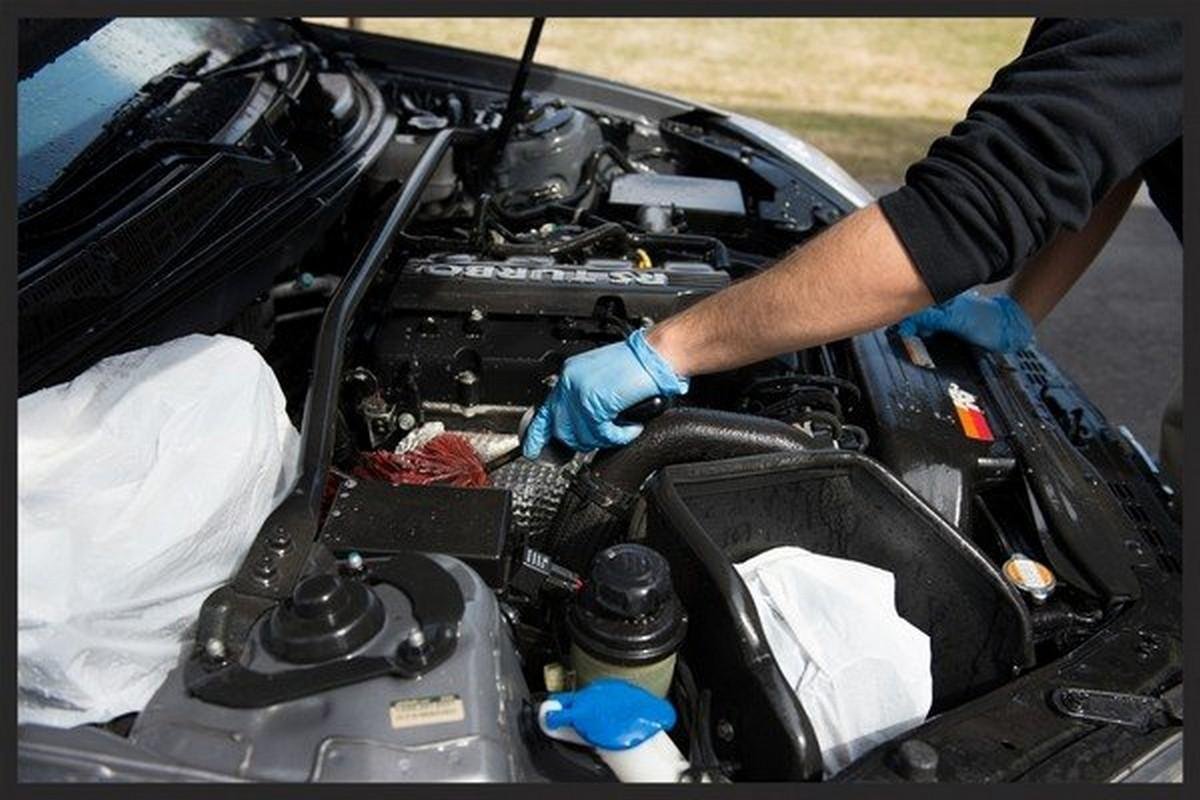 Rub off the dirt and grimes with a brush

After the degreaser come into effect, you can use a brush to remove all the dust completely.

Step 5: Rinse the engine with a hose

You should rinse the engine with a hose, however, don’t splash a high-pressure water flow into the engine.

If you rinse the engine completely and it still looks dirty, re-apply the degreaser and allow it to sit for another few minutes.

Finalize the engine bay cleaning process by washing the car again. It would help to get rid of the left-over degreaser on the exterior car paint. Engine bay cleaning is just as important as the maintenance of the exterior looks of the car. And if you know how to do the cleaning properly, it is not a terrifying at all.

In the below clip, you can see how an engine bay is cleaned and becomes as posh as new.

How to SUPERCLEAN your engine bay

Being unaware of the importance of a clean engine bay, a lot of car owners don't clean the engine bay frequently. This is a terrible mistake, which could shorten the life of the engine and affect the overall performance of the car. Keeping the engine bay clean is an important car tip that you should always keep in mind.