Renault Triber, the Kwid-based 7-seater sub-4-metre MPV, is projected to be launched in India next month. It will be specifically designed for the Indian auto market with some unique features which help distinguish it from other MPVs. While the vehicle is essentially a utility vehicle, its dimensions and prices make it become one formidable competitor of compact hatchbacks in the Indian auto market. 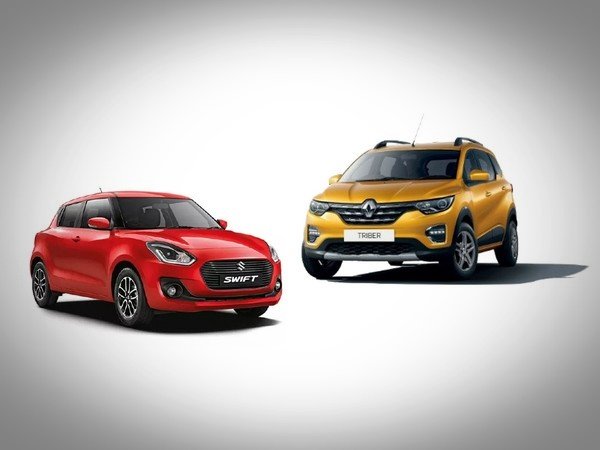 This article is going to help you make a better decision when considering buying a Renault Triber or a Maruti Swift.

The Renault Triber comes with a robust and premium appearance with a wide range of upmarket features, which makes its exterior design a combination of an SUV and an MPV. In the meanwhile, the new-gen Maruti Swift has a sleeker, classier and more energetic, which makes it a breakthrough as regards the exterior design in comparison with the outgoing model but the sporty and youthful nature of the hatchback is still kept intact. Have a quick look at the table below for a comparison between some most prominent exterior features of the two cars. The Renault Triber's exterior design is a combination between an SUV and an MPV. The Maruti Swift features a sporty and contemporary appearance.

Because the exterior design is a matter of personal tastes; therefore, we would not give any decision on which one is the winner in this aspect. If you prefer an SUV-ish people mover with a premium and elegant design, go for the Renault Triber. On the other hand, if you like a hatchback with a contemporary and sporty appearance, the Maruti Swift is a perfect choice.

In this part of our Renault Triber Vs Maruti Swift Comparison, the practical cabin comes across the most unique selling point of the MPV. In the meantime, the Maruti Swift does not want to resist in the competition by offering a cabin of the utmost convenience and comfort. The Renault Triber is claimed to offer the most spacious cabin in its segment. With up to three distinctive seat configurations with different seating layouts: 7-seater, 6-seater and 5-seater, it provides three different corresponding boot space sizes of 84 litres, 320 litres and 625 litres. In the first seating layout, all seat rows are in their place; in the second one, the third seat row is removed; in the last one, the two rear seat rows are removed. Fortunately enough, the removal of these seat rows can be implemented easily without the need for any special tools. With the last seat layout, the Triber provides its passengers with the roomiest cargo space in its class. The Renault Triber offers the most spacious cabin in its segment. The boot space can also be considerably expnaded when the second and rear seat rows are removed.

In the meanwhile, the new Maruti Swift offers only a 5-seater layout with a boot space of 268 litres, which marks a 64-litre improvement over the outgoing model. However, it is still far dwarfed by that in its competitor in its two latter seat configurations. The Triber offers up to three seat rows, which is a clear advantage for such a sub-4-metre vehicle. It also comes with a slidable, reclinable, tumble-able and foldable second seat row, which enables the passengers who sit on this seat row to enjoy 200-metre legroom. The rear seat row will get an 834 mm roof height and a 50:50 split option, which means that the car can house full-size adults in this seat row.

On the other hand, the Maruti Swift will offer the driver with excellent visibility, thanks to the low dashboard and upright A-pillars. Furthermore, it also offers wide and well-contoured front seats but the cushioning is a little bit too soft. The rear seat, with an upright backrest and restricted shoulder support, does not provide a perfect experience, especially for tall passengers. However, it is still the most comfortable cabin ever provided by the Swift, thanks to the improved headroom and knee room along with a 60:40 split option. The shoulder room is also slightly improved, helping this latest-generation Swift a far better family car. 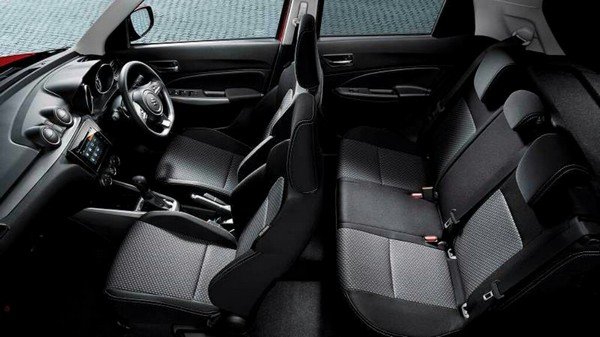 The comfort offered by the Swift is somewhat outdone by that on the Triber.

The interior of the Renault Triber looks premium, thanks to a wide range of top-notch features. The most noteworthy one must be the 8-inch touchscreen infotainment which comes with Apple Carplay and Android Auto connectivity. This will be among the largest systems among all the vehicles which cost under INR 6 lakh in India.

Some other outstanding features which are also provided by the MPV include a 3.5-inch MID, start/stop button, AC vents, 12V charging sockets, keyless entry and power windows. There are also pockets on the back of the seats, one-litre bottle holders, cooled glove box and multiple cubbyholes which further contribute to the practicality of the vehicle. 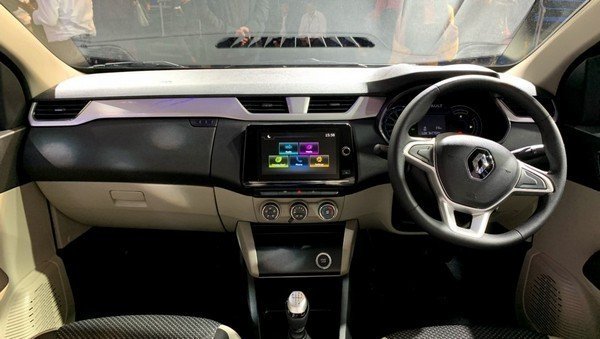 The Renault Triber gets a premium cabin with a long list of top-notch features.

As regards the Maruti Swift, the vehicle is equipped with a height-adjustable driving seat, a 7.0-inch SmartPlay touchscreen infotainment system which is also integrated with Android Auto and Apple Carplay and Mirror Link. Additionally, the Maruti Swift also offers Aux system and Bluetooth connectivity along with a dependent navigation system. Moreover, you are also provided with keyless entry, start/stop push button, central locking and automatic temperature control on the high-spec variants, the last of which is absent in the Renault Triber. The Swift also offers great practicality with an average glovebox, large pockets on the front door, 0.5-litre bottle holders in the rear doors and numerous larger bottles which are positioned between the front seats. Furthermore, there is also USB, aux and 12V charging ports, phone recess, etc. available in the hatchback.

In the meantime, the Swift does not lose in the competition with its rival by offering an equally high-quality cabin.

Both the Renault Triber and the Maruti Swift ensure each journey to be a safe experience for both the driver and the passengers with a wide array of top-notch safety features.The Renault Triber is equipped with four airbags, three-point seatbelts, seatbelt reminders, speed alert system, rear parking sensors and an optional reverse camera. In the meanwhile, the Maruti Swift does not give in to its rival with an equal list features which include dual airbags, ABS with EBD, anti-lock brakes and Isofix child seat mounts as standard.

In this comparison, the two vehicles are equal with each other with each one having its own advantages and disadvantages. For example, the Triber’s touchscreen infotainment system is larger than that of the Swift and provides up to 4 airbags against 2 airbags in the Swift; however, it does not offer such comfortable experience from an automatic temperature control like the Swift. Therefore, the final decision is, again, up to you.

Since the Renault Triber is a full 7-seater MPV; while the Maruti Swift is a hatchback, the former surpasses the latter in all dimensions. The largest distinction occurs to their wheelbase with that of the Triber exceeding that of the Swift by up to 186 mm. The smallest difference transpires to their width with the former outdoing the latter by 4 mm. The Kwid-based MPV turns out to be the winner of this part of our Renault Triber Vs Maruti Swift Comparison. The Renault Triber dominates its rival in all dimensions.

The 1.0-litre naturally aspirated gasoline burner can provide 72 HP against 96 Nm for the Renault Triber, which is outdone by the 1.2-litre petrol unit of Maruti Swift by 10 HP and 17 Nm. The Swift is also powered by a 1.3-litre oil burner which can deliver a maximum power of 74 HP against a peak torque of 190 Nm. The transmission duties on both of the two vehicles are undertaken by a 5-speed MT/AMT unit.

Clearly, while the Triber is the winner in terms of dimensions, the Maruti Swift deserves to be given a thumb up as regards engine and transmission.

In this competition, the Maruti Swift outdoes its competitor in both the engine power and diversity.

Above is a detailed Renault Triber vs Maruti Swift comparison. Overall, the two vehicles do have some advantages and are also not without disadvantages. If you prefer a people mover with an amber cabin and do not mind the lack of a diesel engine, go for the Renault Triber. Nevertheless, if you believe in an established hatchback with more diverse motor options, the Maruti Swift is a better choice.