When Will Tesla Come to India? Here are the Available Launch Details

Tesla and its CEO Elon Musk have been tweeting about When Will Tesla Come to India. Here are all the available launch details

The fuel of future mobility is electricity and it does sound convincing enough in today’s era. But, then finding out the sustainability of an electric-powered car back in 2012 was infeasible, and that is when Tesla nailed it by introducing the market to their battery-powered 5 door saloon, ‘Model S’. The model S is still on sale and is considered as a benchmark in the segment for product evaluation. There are more than 250,000 Model S currently on road, and people have been asking when will Tesla come to India? Well, here are all the available launch details.

Also Read - Tesla Model Y Caught On Camera For The First Time Ever. When Will Tesla Come to India?

In a recent series of tweets, between Elon Musk, CEO, Founder of Tesla, and a member of Avishkar Hyperloop team from IIT Madras which participated in the finals of “SpaceX Hyperloop Pod Competition 2019”, a global competition organized by SpaceX, Musk tweeted that Tesla India launch would happen this or the very next year. The tweet got viral and everyone applauded Musk’s statement about Tesla’s Indian debut. But, the question of the hour is, Is it really going to happen this time?, ‘We say 'this time’ because this isn’t the first time the company or Musk has told us when Tesla will come to India. 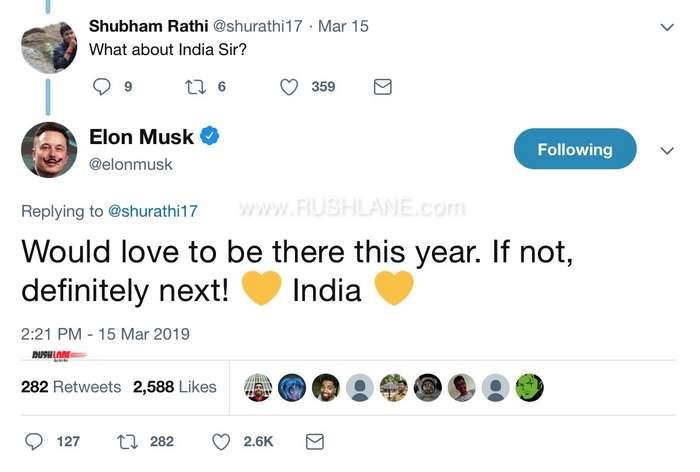 Elon Musk, CEO, Tesla, Tweeted about starting operations in India, when an Indian participant of SpaceX Hyperloop Competition asked him.

The buzz about Tesla’s debut in India is floating around every Indian’s smartphone as one important news of the Indian automobile industry, ever since our Prime Minister Narendra Modi visited the Tesla’s manufacturing facility in the USA in the year 2015. PM Modi’s visit to Tesla’s manufacturing facility cemented Indian’s belief to drive Tesla on Indian roads soon. In 2017, Musk once again replied to a tweet by saying we’ll be in India by summers of this year, and by the time we reach summer, another tweet drops from Musk’s account shattering the dreams of Indian Tesla fans. The tweet read, “Maybe I'm misinformed, but I was told that 30% of parts must be locally sourced and the supply doesn't yet exist in India to support that”. The tweet certainly got retweeted by the official account of Make in India stating that the claims to have 30% localization are not correct and any foreign investor can do business, by the way, it wishes to, as a retailer or by supplying the product as a wholesaler. The tweet never received any revert from Musk. For the very first time, Musk tweeted in 2017 about bringing the Tesla brand to India in the very year's summer.

The tweet series marked a comma on us Indian’s dream, but there was more left to cherish about, as another tweet of Musk in May, but a year later once again brought attention back to the manufacturer. In late 2018, in response to people asking when will Tesla come to India, Musk tweeted, “Would love to be in India. Some challenging government regulations, unfortunately. Deepak Ahuja, our CFO, is from India. Tesla will be there as soon as he believes we should”. This tweet further helped in building up the confidence of potential customers in the brand’s operation in the country. Then, in January 2019 company stated that Deepak Ahuja will be resigning from his role. And, as Deepak was the man who Musk trusted to mark the beginning of Indian operations, Tesla’s Indian debut once again delayed for an unknown period of time. Later in 2017, Musk confirmed there are FDI barriers to start operating in India, since localizing 30% parts is not possible.

Elon Musk and Tesla have been notifying Indians with their plans to starting their operations in the country, using tweets as their only medium of communication. The plans have been shared to the Indian fans and then pulled off a many times by now. Thus, there has been a question cooking up in every Tesla fan’s mind, whether Tesla really has any plan of selling cars in India or not. The answer is still far from a concrete Yes, as Tesla hasn’t made any official statement as of now. But, there’s something which hints towards Tesla making its Indian debut soon.

The government’s plan of shifting to EVs by 2030 is surely one to support the thought. The other is, Tesla has set up a manufacturing facility in Shanghai, China which will start rolling the cars off its production line by this very year itself. The facility is designed to bring down the cost of production for Model 3, which Tesla says will be targeted on the Indian middle-class buyers. As the China-based Gigafactory will produce the cars for RHD market reinforces the speculative take of Tesla’s operation in India. The series of Musk’s tweets also gives a hint of why Tesla never made it to the country.

The Indian transportation infrastructure was never ready to accept the electrification of mobility. Even to date, manufacturers are facing inconvenience to sell EVs in the country. As the charging infrastructure is still in a very nascent stage, which influences the buyer’s decision to go for a fossil powered car. Niti Aayog’s plan of cutting off the production of gas propelled 3-wheelers and motorcycles by 2023 and 2025 respectively will assist in improving the infrastructure required for sustainable ownership of EVs. It will also help in improving the ownership experience for electric car buyers and the market will surely mature for the evolving EV segment.

All these factors will assist in creating a healthy yet competitive market space for EV manufacturers and this is actually what Tesla was waiting for. With the launch of vehicles like Kona from Hyundai and E2O from Mahindra has already provided the segment a start which it deserved and now new other manufacturers also plan to join it. Coming to the question of When Will Tesla Come to India, all we can say is that it should happen sooner than later.

Also Read - What Are Challenges For Future Automobile Industry?

Once the EVS segment is spruced up and starts clocking a commendable sales figure, only then manufacturers like Tesla will make it to India. As it will increase the part vendors to serve OEMs with the product they are looking for to serve the price-conscious Indian market. The current EV market and reforms sound inviting, and manufacturers are trying their best to take up the government mandate as an important opportunity to cash upon. And, Tesla will not miss this chance to make its official entry in the country. But, an official confirmation from the manufacturer is still awaited, and we need to keep waiting for at least a year to hear anything from them.