Being a full-size SUV and a later comer to India, how can the Kia Seltos compete against its sub-4-metre compact counterpart, the Tata Nexon? Read this detailed Kia Seltos vs Tata Nexon comparison to discover.

The Kia Seltos is the first offering for the Indian auto market from the South Korean automaker. Being launched in August 2019, the Kia Seltos has not made the SUV enthusiasts disappointed with a unique exterior appearance, a modern cabin and various engine and transmission options.

In the meanwhile, the Tata Nexon entered the Indian auto market almost two years before the Kia Seltos, marking the entry of the home-grown automaker into the compact SUV segment. Soon after its launch, the compact SUV became a formidable competitor against the Maruti Vitara Brezza and the Ford EcoSport. During its presence in the Indian auto market, the Tata Nexon has created its trust and prestige here and become one of the most popular compact SUVs in the country. Recently, the vehicle has received a mid-life facelift with some feature alterations and engine updates.

Belonging to somewhat different SUV segments, having so different times entering the Indian auto market, it appears that the competition between these two cars is 'unfair'. So, how do these SUVs fare against each other in India? Is the competition really unfair? Read on to discover the comparison of Kia Seltos Vs Tata Nexon.

Kia Seltos vs Tata Nexon Dimensions: Which is bigger?

Since the Tata Nexon is a sub-4-metre SUV and the Kia Seltos is a full-size SUV, the latter measures greater than the former in almost all dimensions.

The two dimensions in which the Nexon is greater than its counterpart are the width and the ground clearance, which ensures a spacious cabin and great off-road capabilities for the former. Both of the SUVs can accommodate five people in total.

Kia Seltos vs Tata Nexon Design: Which is more attractive?

The Kia Seltos sports a chunky bumper, a large chrome ‘Tiger Nose’ grille and a multi-tier full-LED lighting system in the front. On the sides, the car runs on elegantly-designed 17-inch diamond-cut-alloy rims and features a bold shoulder line and square wheel arches with plastic cladding. The vehicle is equipped with a twin-exhaust garnish mounted with sharp lines, which makes the rear of the vehicle appear chunky. Needless to say, the South Korean automaker has made every effort to make its SUV a head-turner with a unique design. 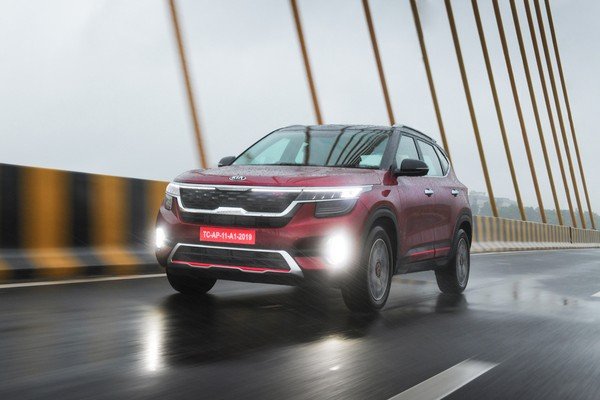 In the meanwhile, entering the Indian auto market in 2017 and attaining several design awards such as the “Best Design and Styling” at 2018 Autocar Award, the Tata Nexon is considered to be a breakthrough as regards the exterior design compared with the previous models by the home-grown carmaker. The exterior of the compact SUV has even made more powerful, thanks to the recent facelift is based on the IMPACT 2.0 Design Philosophy. The front of the compact SUV comes with a new radiator grille, curvy projector sharper headlights with tri-arrow shapred DRLs and a wide horizontal-slat air dam. On the side profile, the Nexon gets new 16-inch alloy wheels, an off-white paint slash stretching under the car window, flared arch wheels with rubber body cladding. Unlike the chunky rear end of the Seltos, the Nexon’s rear looks more like that of a hatchback with some outstanding features like a newly-designed bumper and tri-arrow-shaped LED taillights.

Stepping inside the Kia Seltos, you will get a premium feel, thanks to good colour combinations, high-quality materials and elegant use of leather and plastic. This also helps keep the price aggressive as well. The rear seat row can comfortably accommodate three people, while the middle passenger can sometimes feel unpleasant due to insufficient cushioning. The cargo space of the Seltos sits at 433 litres, which is 33 litres and 8 litres bigger than that of the Hyundai Creta and Tata Harrier, respectively.

Inside the cabin of the Tata Nexon is an intelligent combination of colours and materials. The driver sits on a highly-positioned seating position, which helps him/her get a good view with a supportive driver seat and a wide footwell. The rear seat row is comfortable with roomy legroom and headroom. The boot space of the Nexon measures 350 litres which is smaller than that of the Kia Seltos but still can store much luggage.

Kia Seltos vs Tata Nexon Features: Which is more convenient and safer?

Dominating the dashboard of the Kia Seltos is a 10.25-inch touchscreen infotainment system with UVO connectivity suite which is an advanced connected car technology and can support up to 37 advanced features. Moreover, the SUV is also packed with a Bose 8-speaker unit, a Smart 8.9-inch Head-up display, a 360-degree camera, powered seats, a smart air purifier and an electric sunroof. The recent upgrade has given the Nexon connected technology platform iRA, which supports modern functions like natural voice recognition, vehicle navigation, geofencing and What3Words, etc. This is the first time that Tata provided its model with this modern feature, which can be regarded as a method to compete in the fiercely competitive SUV segment. Other outstanding features of the compact SUV include a 6.5-inch touchscreen infotainment unit with Android Auto connectivity, a Harman 8-speaker unit, automatic temperature control, start/stop push button, powered window, multi-function powered flat-bottom steering, an electric sunroof. In India, safety and security are always one of the top priorities when choosing a car. In this aspect, both the Kia Seltos and the Tata Nexon gain a clear advantage over their competitors, thanks to a wide range of features on offer. Nevertheless, when comparing the two cars side by side, the Kia Seltos appears to be the winner.

The Tata Nexon does not give in to its competitor in this competition. It is the first Indian-made car to achieve a 5-star rating in the global NCAP crash test. To deserve this rating, the compact SUV is packed with a wide range of safety features such as dual front airbags and ABS with EBD provided as standard across all the variants. Moreover, it also comes with height-adjustable seatbelts, parking sensors, corner stability control and ISOFIX child seat, etc.

Kia Seltos vs Tata Nexon Design Engine and Transmission: Which is more powerful?

Firstly, it is worth mentioning that the Kia Seltos and the Tata Nexon receive their power from both petrol and diesel motors, all of which are BSVI-compliant. The turbocharged gasoline burner of the Tata Nexon, which has witnessed an improvement in power in this facelift, is more powerful than the petrol motor but less powerful than the turbo petrol unit of the Kia Seltos.

The transmission options of the Tata Nexon Petrol are not as diverse as the Kia Seltos Petrol, which gives the latter a clear advantage over its counterpart.

While the transmission duties on the Kia Seltos Diesel are undertaken by only a 6-speed torque converter, those on the Tata Nexon are implemented by both manual and automatic transmission. Here, the advantage of the transmission options diversity is given to the Nexon.

Kia Seltos vs Tata Nexon Top Speed: Which is faster?

In this aspect, the Seltos is the clear winner with a much greater top speed than the Nexon.

The Kia SUV can also accelerate from a standstill to 100 kmph in a shorter time than its counterpart.

When choosing their cars, auto customers pay a lot of attention to the fuel mileage since a car with decent fuel mileage can help the owners save a great deal of money in the long run,

In this aspect, the Tata Nexon attains a clear benefit over its competitor, thanks to its greater fuel mileage in both petrol and diesel versions.

Kia Seltos vs Tata Nexon Price: Which is more costly?

The Kia Seltos is priced at a higher range than the Tata Nexon.

Given the wide range of the advanced features along with various engine and transmission options that the Kia Seltos offers, its higher price is not so surprising.

For more Kia Seltos compare, pay a visit to IndianAuto.

Apart from the Kia Seltos, the Tata Nexon also rivals the Hyundai Venue, Huyndai Creta, Ford EcoSport and even its sibling, the Tata Altroz.

Visit IndianAuto to discover a list of Tata Nexon compare.

Kia Seltos vs Tata Nexon Verdict: Which is the winner?

Above is a detailed Kia Seltos vs Tata Nexon comparison. To give a decision on which is the winner in this 'unfair' competition is quite difficult. However, we can give a recommendation on which one to choose. The Kia Seltos is more suitable for people who prefer a full-size SUV with a unique exterior design, cutting-edge features, various engine options and do not mind invest some more money in their cars. On the other hand, the Tata Nexon is an ideal option for those who are on a tighter budget and prefer a safe fuel-efficient compact car.

To read more car comparisons in India, please pay a visit to IndianAuto.