Wondering what cars that the rich and famous drive? Here are the most expensive cars in India with owners whose prices are listed out on the descending order.

The Indian rich and famous figures are known for their deep taste in luxury cars. While there are some certain cars that wow the world with their colossal price tags, some wealthy people in India manages to own the most expensive cars with their deep pockets and there is no dearth of such models on the Indian roads. Be it Mukesh Ambani with the S-Class or Virat Kohli with his Audi R8, here are the most expensive cars in India with owners.

This stunning Rolls Royce Phantom VIII EWB is the first model in our list of most expensive cars in India with Owners. Owned by India’s business tycoon, Mukesh Ambani, this Rolls Royce Phantom Series VIII Extended Wheel Base is completely worth a fortune. The base on-road price of this monstrous machine is Rs 13.5 Crore and you know it, it would be staggeringly higher with customisation options that Rolls Royce might offer. This Phantom is essentially the most expensive cars of Mukesh Ambani as yet. Rolls Royce Phantom Series VIII EWB is also one of the costlier cars in India ever. The luxury saloon is underpinned by the new aluminium spaceframe platform which is marketed as “Architecture of Luxury” by the auto marquee. It is also one of the quietest vehicles on the planet thanks to the utilization of 130 kg of sound insulation as well as the sound-proof glazing on the windows. Under the hood of the Phantom VIII EWB sits a massive 6.75-litre twin-turbo V12 engine that pumps out 563 BHP of max power and 900 Nm of torque. It can do 0 – 100 kmph sprint in around 5.4 seconds.

India’s wealthiest man Mukesh Ambani always move around in armoured luxury cars and of course, these set of wheels never come cheap. The Ambani family owns a Mercedes-Benz S-Guard W221 S600 that is packed with heavy VR9 ballistic protection along with run-flat tyres among other safety kits. With these features, the S600 is a brilliant car that can run up to 80 km after the tyres are totally deflated and save its passengers from the IDE blasts. While the exterior looks similar to the standard S600, the Guard’s cabin features a complicated mix of reinforced steel and fibre along with thick laminated glass to withstand the heavy repeated blows. Powering the Mercedes-Benz S Guard S600 is a twin-turbocharged V12 engine that is tuned to belt out 517 BHP of power and 830 Nm of torque. Since the kerb weight of the car is as heavy as a whale, specifically at around 4.5 tonnes, this engine makes sure the quickest manoeuvres and prevents the car from bogging down during the getaways. Among Mukesh Ambani cars collection, the S-Guard S600 is the most expensive armoured car that costs him a decent amount of Rs 10.50 Crore.

Aamir Khan is a famous Bollywood star who have hit the headlines for his successful films and a host of scandals at the same time. Aamir Khan received some death threats after the first season of his Satyamev Jayadev TV show and that’s the reason why the actor bought himself a bomb-proof car – Mercedes-Benz S600. From this, Aamir Khan became the third person to possess a bullet-proof vehicle after Mukesh Ambani and ex-PM Manmohan Singh. The S600 does a great job to provide good protection for the actor in the rarefied world when there’s plenty of people trying to knock him down. Like Mukesh Ambani’s car, the Aamir Khan’s S600 also provides its occupants with VR9 ballistic protection level that can stop the high-calibre bullets from attacking the cabin. It makes use of the same engine as found in the earlier car of the industrialist with the famed V12 engine featuring twin turbochargers. This engine propels the 4 ton-weigh car to reach the top speed of 210 kmph.

The Indian Bollywood actors and actresses are truly the expensive car nut. Hrithik Roshan is among them. Roshan owns one of the Most Expensive Cars in India in the form of the Rolls Royce Ghost Series II. The superstar shelled out almost 7 Crore to buy the highly-customisable Rolls Royce sedan which is spotted with Hrithik most of the time on his drives. Unlike many others who prefer being chauffeured in this luxury saloon, Hrithik loves to sit in the front seat. The Rolls Royce Ghost Series II draws the energy from a 6.6-litre twin-turbo V12 motor that churns out 563 BHP of max power and 780 Nm of peak torque. As the name suggests, the car can ride like a “ghost” on the way with an ability to sprint from 0 to 100 kmph in 4.9 seconds and hit the electronically-limited top speed of 249 kmph. The car is reported to get the hefty price of Rs 5.25 Crore and has an incredible performance job on the roads. Just like the Ghost Series II, the earlier Ghost model also adopts a 6.6-litre twin-turbo V12 engine that churns out the same power and torque output. This powerful engine comes linked with 8-speed automatic transmission.

Next in the list of most expensive cars in India with owners is Gautam Singhania along with his Ferrari 458 Challenge. Yes, we are talking about the global textile conglomerate’s big boss, Gautam Singhania, who has a great obsession with motorsport. Gautam Singhania has set the track on Buddh International Circuit on fire with the country’s unique Ferrari 458 Challenge. The super sports car of Gautam has a base price of approx. Rs 2.7 Crore (in the US market) but the businessman had to spend nearly Rs 5 Crore to have it imported into India. Performance-wise, the 458 Challenge is a race-spec car that employs a 4.4-litre V8 engine putting out 570 PS per 540 Nm of torque. The Ferrari 458 Challenge has been with Gautam for many years but still, it’s the one that can’t be purchased off the shelf in our country.

Adar Poonawalla is one of the famous owners of Bentley cars in India. The billionaire obtained the legendary Bentley Continental GT in his expensive car garage which comprises of many dreaming wheels like Rolls Royce Phantom, Ferrari 458 Speciale Aperta, Mercedes-Benz S600 L, etc. Adar Poonawalla is seen driving around in the blue-coloured Continental GT multiple times, showing his favour towards the world-renowned grand tourer. The Continental GT is available with two engine options, including a V8 that puts out 521 BHP/ 680 Nm along with a powerful 6.0-litre W12 twin-turbo engine that makes 626 BHP/ 820 Nm of torque. Adar Poonawalla car is integrated with the W12 motor option.

After his retirement, Ratan Tata has more free time for his passion for cars. Into Ratan Tata’s car collection, the Ferrari California is among a bucketful of expensive cars that the respected businessman gets hold of. Sir Tata was seen moving around in the fast lane with the “Prancing horse” various times that turned heads for its gorgeous and opulent look, especially by the zesty shade of Rosso Red. 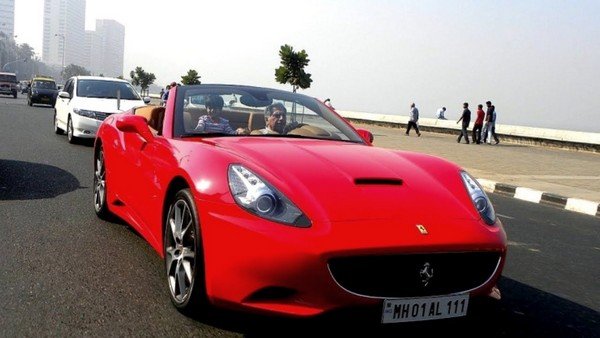 The Ferrari California is the first front-engined Ferrari car to draw the 490 BHP of power and 504 Nm of torque from the 4.3-litre V8 engine unit. Even in the picture, the Rosso Red California looks umber-cool for a joyful weekend drive, doesn’t it?

We all know about Amitabh Bachchan with his ‘mouth-watering’ garage of luxury models. Known as the Shahenshah of Bollywood, there’s no need to surprise that Amitabh Bachchan is the owner of the most expensive car in India – the Rolls Royce Phantom VII that can be had at the price of Rs 3.5 Crore in India at that time. The Phantom VII is said to be a gift from the filmmaker Vidhu Vinod Chopra after “Eklavya” was released. Though some sources revealed that Amitabh Bachchan has sold the Rolls Royce Phantom VII to someone else, he was once the famous owner of this ultra-desirable vehicle. Bachchan’s Phantom is powered by a huge 6.75-litre V12 petrol engine, good enough for 453 BHP of maximum power. This Roller is definitely among the most alluring models in our list of most expensive cars in India with owners. The jaw-dropping car collection of Virat Koli includes a limited-edition Audi R8 LMX which is said to be the most powerful and quickest road-car of India at that time. Audi car has been a favourite brand for young Indian cricketers. The R8 LMX seems to be a perfect match for Virat Kohli. The R8 LMX is a special car. It features a distinctive and segment-first laser high-beam lighting system while being hauled by a 5.2-litre V10 engine paired with a 7-speed S-tronic transmission and a Quattro AWD system. Sending the power output of 563 BHP and a torque of 540 Nm, Virat Kohli's beast can leave other cars in the dust with a top speed of 320 kmph.

The last car in our list of most expensive cars in India with owners is this stunning hybrid. Being an avid luxury cars collector, Sachin Tendulkar makes himself the owner of most expensive cars in India, including a BMW i8. Sachin has given the i8 some stunning mod jobs, e.g the red-hot red paint scheme along with revised bumpers among others, thus complementing the supper car’s aggressive aesthetics. The BMW car does not appear with a massive engine like any other vehicles in the list since it is a PHEV sports car. It makes full use of a hybrid system under the bonnet that encompasses a 1.5-litre 3-cylinder petrol engine along with an electric motor that generates a combined power and torque figure of 362 BHP and 570 Nm. Acceleration to 100 kmph from a standstill takes the car only 4.4 seconds, showing that the BMW i8 plays no second fiddle to these aforementioned wheels. Price for the BMW i8 of Sachin Tendulkar is said to stand at around Rs 2.14 Crore.